I went to the Red Bull Air Race being held over San Diego Harbor on Saturday. I took the Coaster downtown with Chad and Renai where we met up with her friend, Gina. We walked down to Seaport Village where we stopped for some drinks and food before the races started at 2pm. 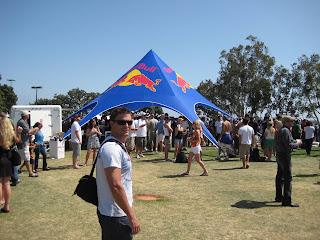 Saturday was Qualifying Day where all twelve pilots raced through the course twice to try and finish with one of the eight best times to move on to the final day of racing on Sunday. The weather was perfect, nice and sunny, but not too hot. Chad and I had tickets to the viewing area on the South Embarcadero, but Renai and Gina's tickets were for the North Embarcadero. 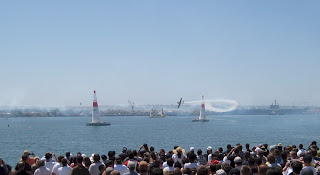 The races were exciting and fun to watch. The racing planes had to weave back and forth between the inflatable pylon gates without touching them or flying over their tips at 65 feet. The added difficulty was that the planes had to fly with their wing's horizontal between the blue colored gates and with vertical wings between the red gates. Any infractions carried time penalties and the judges would sound a loud horn. It was amazing how the planes could fly over 200 m.p.h. while being so low to the water. 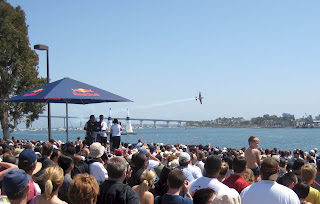 The most exciting moment of the day's races was when the French pilot clipped the final finishing gate with his plane and ripped off the top of the inflatable pylon. He had been finishing with a fast enough time to qualify within the top eight pilots, but the 10 second penalty for collapsing the air gate knocked him out of contention for Sunday. 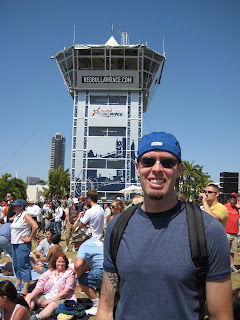 The American pilots had a good day with some of the best times, but the British pilot, Paul Bonhomme, had the best time of both qualifying runs and he ended up winning the Final on Sunday with the Americans coming in 2nd and 3rd. 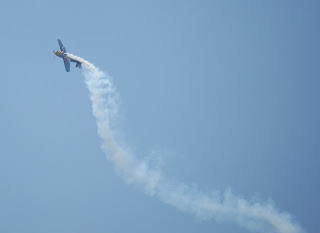 After the races, Chad and I met back up with Renai and Gina in the Gaslamp Quarter where he had dinner at the Irish pub, "The Field". Chad and I went to see the movie, "Iron Man", which was really good before we took the last train back up the coast. 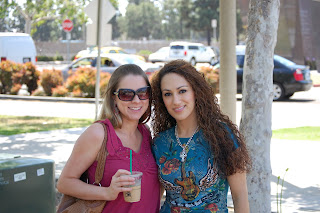 Posted by Noah Unsworth at 8:04 PM