While I have completed the Planche release trick in two positions before, Saturday was the first time I tried a Back End Planche on the Trapeze. In this advanced version, you have to move into the plank position in one motion at the back end of the swing. I couldn't attempt it until I first learned the warm-up swing to a satisfactory level.

I have also been practicing the Birdie for a few weeks now, throwing it to the net, but yesterday Wayne caught it for the first time. Since I am tall, I call it the Albatross instead. I was a bit nervous about the catch so I forgot to squawk out my bird call as I swung forward.

After class, Tori taught me how to lock my legs on the Catch Bar. I can't wait until I learn to catch one of her tricks. 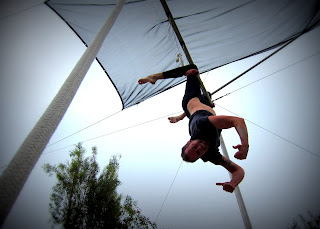 Saturday night, Tori and I met Dave, Lindsey and the rest of the group at the San Diego Sports Arena to see The Flying Caceres trapeze act in the Ringling Bros. and Barnum & Bailey Circus. I haven't been to the circus since I was a child, so I was pretty excited. The trapeze act was very cool with a double-decker rig where they performed bar-to-bar tricks that I have never seen before. 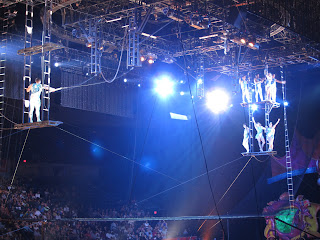 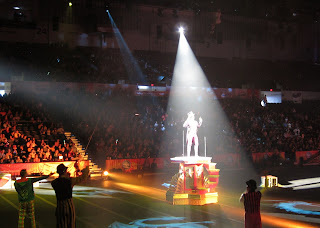 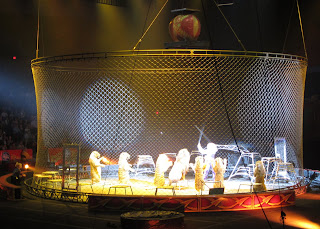 It was a great show with lots of "Wow!" moments. Stunt Horse-Riding, Aerialists, Acrobats on the Teeterboard & Russian Bar, Martial Arts and even eight motorcycles speeding within a 16' Steel Sphere at the same time. I especially liked the Specs when the circus floor would flood with a sea of performers, dancers, clowns and animals in colorful costumes. 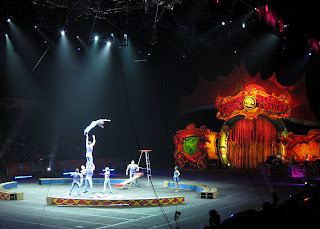 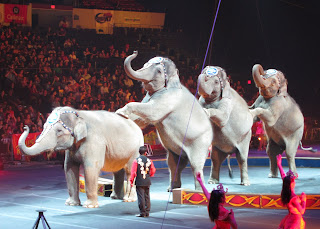 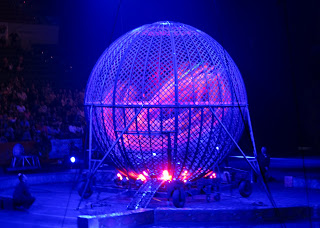 Beside the stunt horseback riding, there were several other animal acts including the Elephants, Lions, Tigers, Ponies, Mountain Goats and Dogs. Funnily enough, one of my favorite acts was just watching common house cats perform tricks.
Posted by Noah Unsworth at 5:07 PM