I went out to the Flying Trapeze rig with Tori for the second time yesterday and I pulled off my first release trick called the Planche (French for Plank). The Planche involves bringing the legs up so the fly bar is behind the thighs on the front swing and straightening out into a rigid plank on the backend with the bar tight under the butt. After releasing the bar at the top of the swing, the arms are extended in front for the catch. 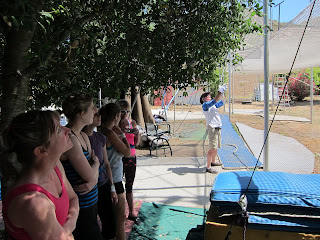 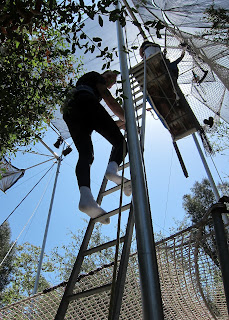 After a quick ground lesson, I had four swings to practice the position to the net. I was so happy that I was able to straighten out into the plank on my first swing that I forgot to extend my arms out after the release. After the adrenaline rush of the first swing, time slowed on my second so that it felt like forever until I heard the "Hep" command to release the bar and stick out my hands. My technique suffered on my third so I had to release early as my body fell away from the bar. The last practice swing was my best, but I still had some minor flaws with my head and feet positions. Since I was behind Tori in line, I got to watch her work on her swing each time I was up on the platform. She gets so high, swinging over our heads in the seven position. 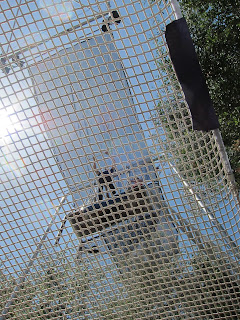 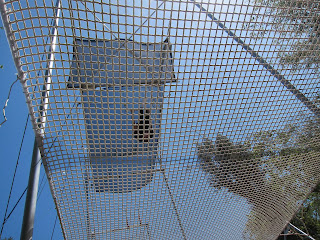 I was able to complete both of my Planche catches even though I made some mistakes with each. I forgot to look forward from my neutral face on the first and on the second I grabbed the catcher's arms instead of letting him lock onto me. While I was doing my catches, Tori was working on a more difficult trick, the Cutaway Half. To my inexperienced eyes, it looked like there was a flip and a twist involved, but I am not positive. On her first attempt she missed the catch, but was still able to touch hands. With her second try, she was able to complete the grab. Nice! 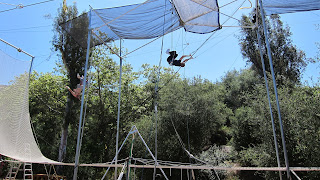 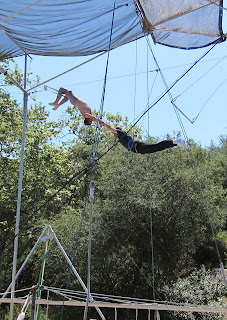 Next time I come to Trapeze High, they told me I am ready to learn the one-handed takeoff and how to swing higher with added momentum from my legs. While I was very sore after my first trapeze session, today I only have a little stiffness in my upper back. Big improvement.


Here is the video of my first attempt to be caught from the Planche position.
Posted by Noah Unsworth at 6:57 PM