Chad came down from Los Angeles to spend the 4th of July with us. It was unusually overcast but that was fine since we weren't going to the beach on this holiday for once. Instead we were heading to Escondido for a barbecue at Trapeze High. Before driving out, we walked up the street with my brother and his family to watch the Neptune Avenue Parade. It is yearly event in Leucadia held by the Neptune Yacht Club where the neighborhood turns out and drives, bikes, scoots or strolls down Neptune Avenue. Everyone is free to join in or just watch. 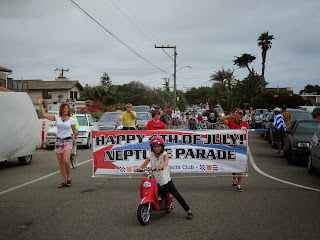 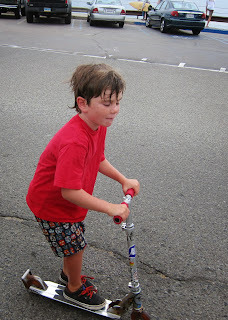 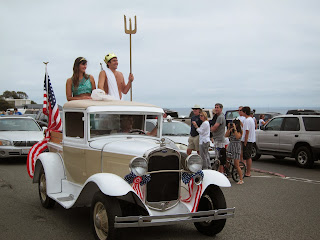 We found the sunshine out at Trapeze High and Tori introduced me to quite a few of the club flyers that I hadn't had a chance to meet yet. Since I am still using a safety belt, I needed to wrangle up a line puller who was sober. The board was crowded with experienced flyers and I got in a few swings before having a drink myself. It was Chad's first time out at the rig. He enjoyed watching, but I couldn't convince him to attempt a swing. Maybe next time. 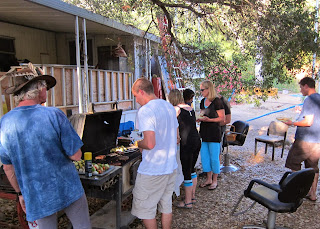 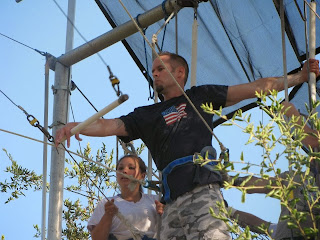 As the party winded down at twilight, the conversation turned to previous attempts to catch the Piggy Hocks. It is a two-person trick with the second flyer jumping on the first flyer to ride piggy-back before flipping off to be caught by the catcher. With Chris (Hot Dog) in the catch trap, Deena attempted it with Wayne a couple times without success. Kenny volunteered and after several timing adjustments with Wayne, Chris caught him on their 4th attempt.