Chad's birthday is August 1st, but he decided to celebrate it early this year. After his business trip ended on July 19th, he extending his hotel stay in Vegas and invited us to join him. At first, Tori could not come along since her sister was visiting from Florida, but everything worked out when her sister decided to stay with friends in LA for that weekend. Thursday morning, Tori and I rented a Chrysler 200 and drove out from San Diego, arriving in less than 5 1/2 hours. 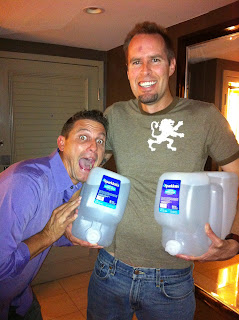 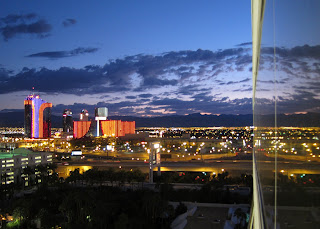 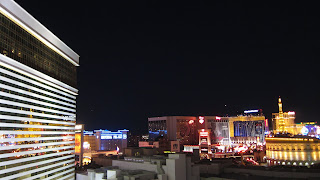 Chad had a great room at The Mirage, right above the pool with a nice view of The Strip from Caesar's Palace down to the MGM Grand. This is the first Vegas hotel I have stayed at where the windows open so I was able to take some great photos of the skyline without annoying glare from the glass. After a champagne toast and a few beers with Chad, we headed over to the MGM Grand for dinner at Fiamma. Chad and I ordered the Gnocchi; Spinach and Ricotta for me and the Tirolesi for him. Tori probably had the best tasting dish of the night with the Roasted Petaluma Chicken. Very tender! It was a great meal. 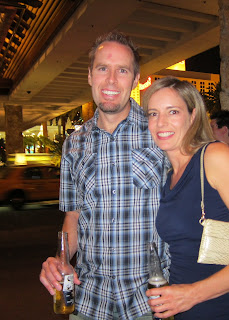 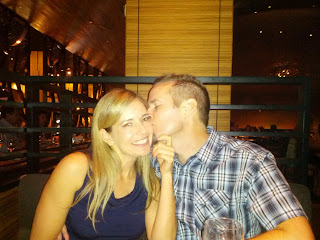 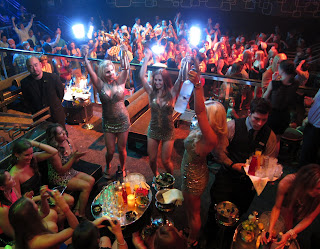 After dinner, we took a taxi over to Bellagio where Chad's friend, Jessica, got us on the list for Bank. We skipped the long line outside the nightclub and went right in. I liked the design of the multi-tiered club with the dance floor at the bottom. We found a nice spot on the upper-level railing where we could set down our drinks and dance. After I bought the first round of expensive drinks ($52 dollars!), Chad found Jessica who gave us 8 drink tickets. Sweet! We ended staying to around 1:30am. 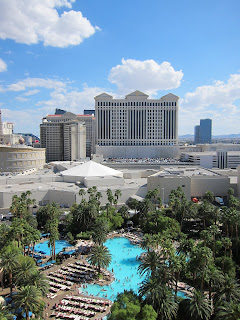 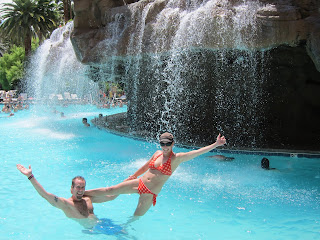 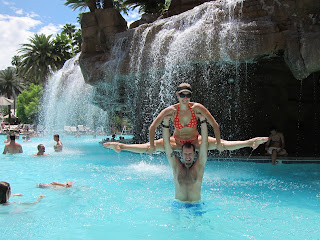 I had a minor hangover Friday morning, but a Bacon, Egg, and Cheddar Biscuit down at The Roasted Bean cured me. (No more Coronas for me! Ever!) Chad, Tori and I spent the afternoon at the Mirage pool. After a heat wave the week before, the temperature in the high 90's was perfect. In the shade under the waterfall, it was even a little bit cool. Between relaxing in the water and reading on the lounge chairs, Tori taught me a couple of hand-balancing positions: one where she stands across my bent knees while her other foot hooks behind my neck and a second pose where I lifted her in the air behind my head as she pulled her legs into splits. 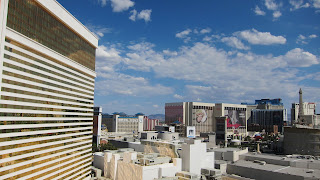 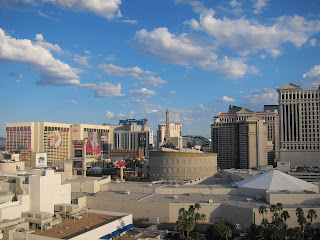 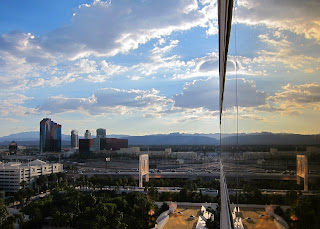 After picking up our tickets at Treasure Island for Mystère, the original Vegas Cirque du Soleil show, and relaxing in the room, Tori and I went down to Stack to meet up with Chad and his dinner date, Andrea. I have been here before. Ordering several of Stack's delicious appetizers and sharing is the way to go. We started with the Garbage Salad and then the Pan Seared Dumplings, Adult Tater Tots and Crunchy Steak Fries. The Inpeared cocktail is probably one of the best I have had in a long time. For dessert, Chad recommended the Jelly Doughnut "Munchkin" Holes. They were awesome! 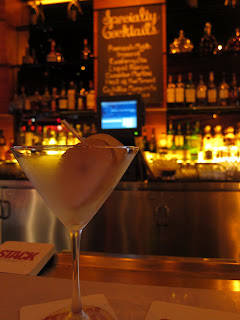 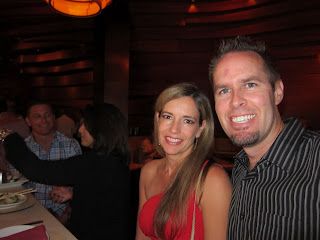 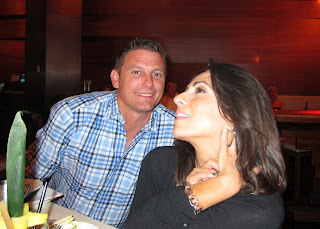 After dinner, we took a taxi over to The Cosmopolitan hotel where we met up at the Chandelier Bar to pick up our A.W.O.L wristbands that would get us into all the best weekend clubs and pool parties. Chad's friend upgraded us for free so we received the VIP cloth wristbands instead. At 10:30, we skipped the line with the A.W.O.L group into the Marquee Nightclub. Compared to Bank, I didn't care for the club at all. It had a confusing layout and there was no place to stand in one spot unless you wanted to pay a fortune for table service. After trying to dance on the extremely packed dance floor for a couple songs, Tori and I left early. Tori rested her feet in the casino while we played slots, winning enough to pay for the taxi back to the Mirage. 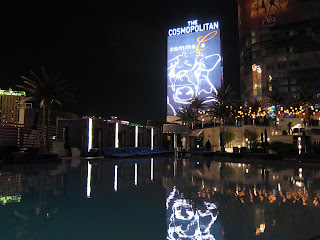 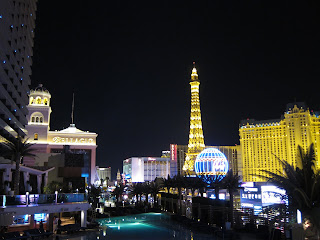 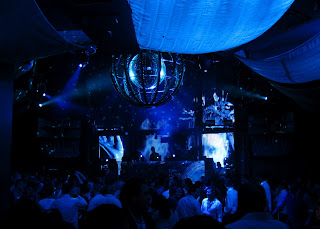 Before heading over to Tao Beach on Saturday morning, the three of us went for breakfast at B.B. King's Blues Club where I ordered Chicken and Waffles for the first time. Then it was a short walk across the street to the Venetian where we were able to enter Tao Beach quickly because of our wristbands. After the huge pool at Hard Rock's Rehab last year, I was surprised to find such a tiny pool here. It was blazing hot but we lucked out and found a shaded spot under a small palm at the edge of the pool. Chad's friend, Jessica, from Bank joined us and we had a fun time watching the drunken revelry for several hours before heading back our room to get ready for Cirque du Soleil. 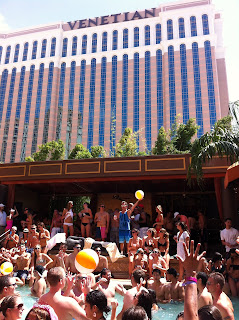 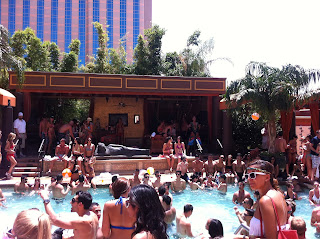 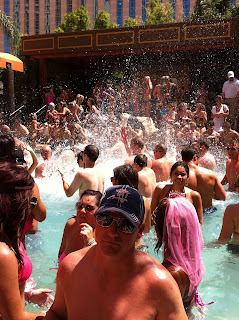 Since Tori is a flying trapeze instructor, we were really excited to see the new trapeze act that is the grand finale of Mystère. It was great having Tori identifying all the different tricks the eight flyers were throwing in rapid succession to the two catchers, including simultaneous triples. Leading up to the show, I had heard many people complain about the crying baby on the stage, but it didn't bother me and I thought the women playing the baby was very entertaining. I was also impressed by her driving skills, speeding her small cart through the narrow gaps of the undulating stage and along the theater's aisles. 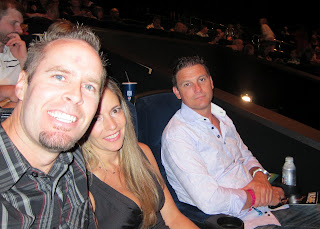 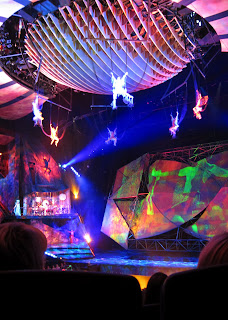 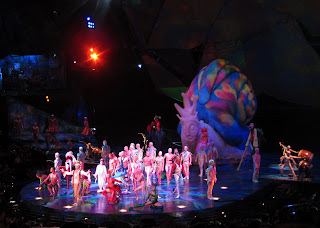 I have seen "Love" and "O", but I think I prefer this show's original cirque format the best. Beside the trapeze, the Aerial Cube was an amazing first act and my favorite. I also enjoyed the Chinese Poles, the Bungee, and Ginger Ana Griep-Ruiz's solo Aerial Tissu where she spins and swoops from hanging fabric. I have seen the Hand-Balancing routine on television before but it is even more impressive in person where they perform on a rotating dome. I enjoyed the humor used by the acrobats performing on the Trampolines, Korean Plank and Fast Track. After the show, we had a nice dinner at Phil's Italian Steak House in Treasure Island. (The bread with cheese and bacon baked right in was mouth watering!) I tried an Old-Fashioned for the first time, but I did not like it. I guess I don't care for the smokey taste of Whiskey. 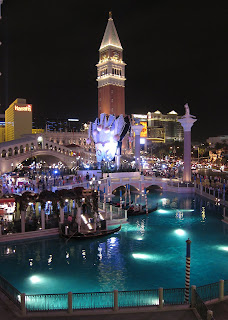 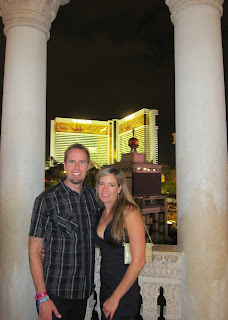 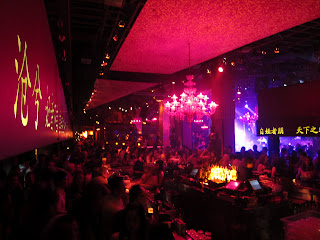 After dinner we went back over to the Venetian for the Tao nightclub. There was a huge crowd waiting to get in, but we slipped right in through the back entrance with our wristbands. (Chad told us that it normally costs $100 dollars for a "Front of the Line" cover on Saturdays.) I liked Tao much better than Marquee, but Tori and I didn't stay for very long since the music wasn't our favorite. Chad closed the club, making it back to the room around 5am. After sleeping in Sunday morning and eating a quick breakfast with Chad, we hit the road at 11:30am. We stopped at Buffalo Bill's on the Nevada border to ride the Desperado coaster, but it broke down just before our turn. Maybe next time. Except for a hour of stop-and-go traffic before Barstow, the traffic was not too bad. With Tori using Maps on her iPhone, we were able to escape the last leg of bad traffic on the back roads. 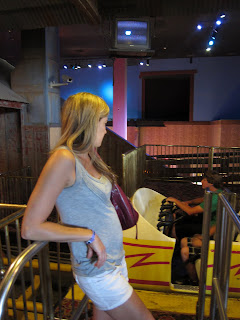 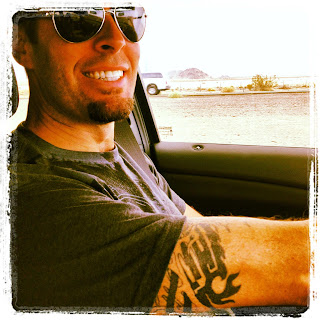 Posted by Noah Unsworth at 9:43 PM