After a fairly calm New Years Eve at Captain Keno's with Kenny and Jill, Tori and I went out to Trapeze High for the New Years Day Club Fly. While I have been learning to be a catcher while working the Saturday classes, I had been neglecting my flying. My goal for the day was to get my Back End Splits caught. 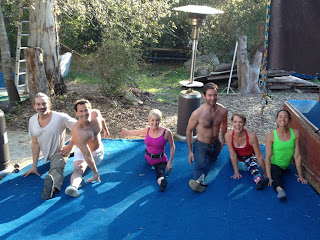 After throwing a couple practice man-splits to the net, I worked on the Cradle net trick while we were waiting for the catching to start. Kenny convinced me to try the Half Time Knee Hang. Suspended above the board by my arms, I had to reach out to hook the bar with my knees before dropping off backwards and upside-down. It was an unusual take-off but not too scary since I have long legs to snag the bar. 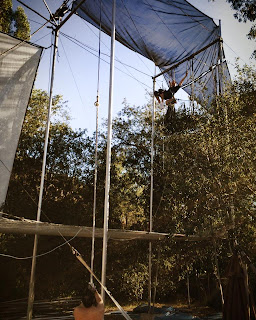 Working on her Cut Away Half, Tori also flew today for the first time in a while. She really pops off the bar with so much height. Very graceful! 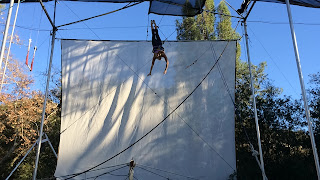 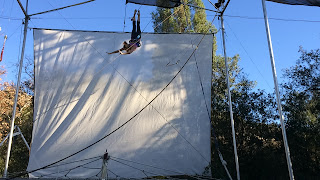 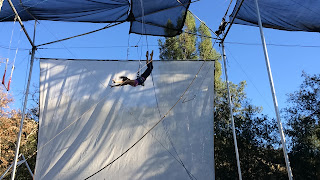 After Wayne climbed up into the catch trap, I finally got a chance to throw my Back End Splits to a catcher. Our timing was off for the first two attempts but he caught me on the third. It felt great!

I love the slow motion video feature on my new iPhone 5s. It's perfect for filming trapeze. The raw video shot at 120 frames per second is also amazing for capturing the realistic motion.
Posted by Noah Unsworth at 1:18 PM