Maybe because I am now a married man, I volunteered to cook a Thanksgiving Turkey for our family dinner this year. For this first attempt, I decided to use a Reynolds Oven Bag because the best turkey I have ever tasted was cooked with that same technique. At 8:30am, I went downstairs to pull my thawed bird out of the refrigerator and prep it. Since I planned to cook the turkey without stuffing, I filled the cavity instead with chopped onion, garlic cloves, apple and a sprig of Rosemary. 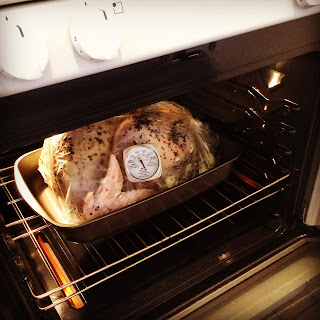 After buttering the skin and sprinkling it with paprika, I slid it into the bag surrounded by five chopped celery stalks and two more onions. I then poured a chicken broth mixture of basil, thyme and pepper over the turkey before sealing the bag. We lost the included nylon tie so Tori cut a plastic strand from the bag to tie off the end instead. After venting the bag and placing it in the oven, I realized that I forgot to add salt but I decided to leave it alone since Butterball turkeys already contain an 8% water solution of salt and spices. 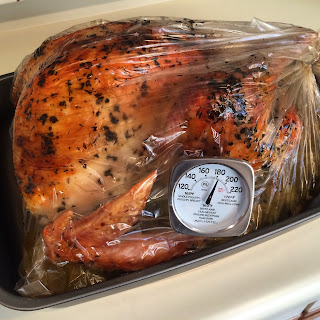 After 3 hours and 20 minutes, the meat thermometer in the thigh reached the desired 180 degrees and I pulled the bird from the oven. While I let it rest for 20 minutes, I re-watched a New York Times video on how to carve a turkey. Learning how to pull the entire breast away from the bone to cut separately on a second board was much easier that I expected. After I finished carving, I added the drippings from the roasting pan to some McCormicks's Turkey Gravy Mix. The gravy turned out great, but next year I will attempt to make giblet gravy from scratch. 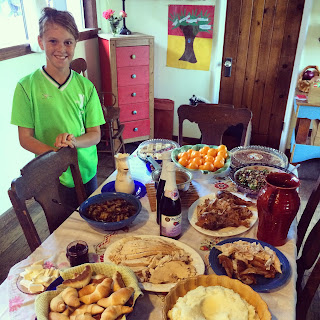 Along with Tori's mashed potatoes and roasted brussel sprouts, we took our prepared food over to my brother's place for the feast. We ate on a nice table set up outside in the yard and my turkey was deemed a success. It was very moist and flavorful. Afterwards we all hung out on the hay bales set up around the fire-pit before going back inside for desert. It was a great day!
Posted by Noah Unsworth at 5:03 PM