After an overcast and gloomy weekend, the sun finally came out for the Memorial Day BBQ at Trapeze High this Monday. Since Tori and I were among the first arrivals, I took turns shooting arrows into the crash mat re-purposed into an archery target. After a few practice shots, I was able to sink most of my arrows around the circular target with one hitting inches from the bulls-eye. 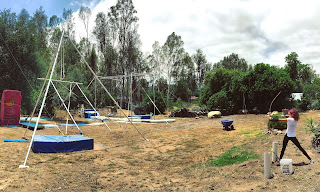 When others arrived, a group of us climbed the ladder to fly on the Trapeze Rig. After a couple warm-up swings, I threw my Splits for the first time without practicing it in safety lines first. Except for some minor whiplash on my first drop to the net, I remembered how to perform the trick despite not attempting it in over six months. My shoulder was not bothering me at all, so I worked on my Backend Planche and Lianna offered to climb up to the catch trap for me. We caught all three attempts even though I may have been a bit grabby. It felt great to fly again. 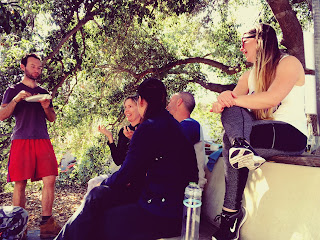 At 2:30, Chris fired up the BBQ and grilled up the large variety of burgers, steaks, pork chops, sausages and kebabs. After eating and catching up with everybody, a second group went up for another round of trapeze. I am glad I flew before I ate such a big meal since there were too many delicious deserts to ignore. Chris showed off some of his best tricks and it was great to see Dave flying as well instead of coaching and pulling lines for other flyers. 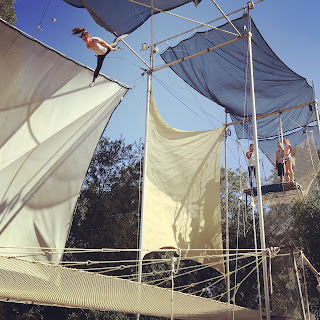 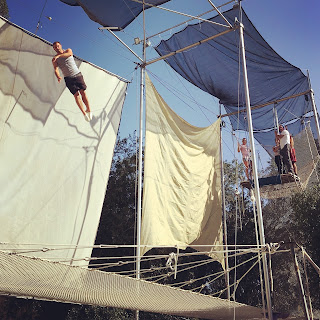 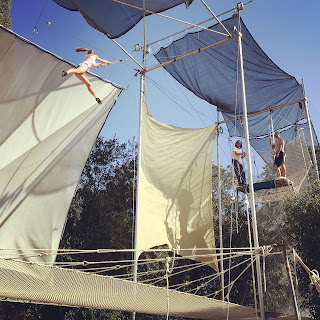 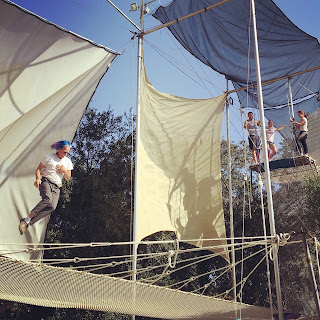 Near the end of the party one of the guests got a quick lesson and flew for the first time. Normally a beginner swings many times in a class before being caught at the end but Chris went up to catch her Knee Hang after her second swing. It took two tries but she pulled it off. Below are more videos of flying trapeze plus Kenny and Tommy messing around on a Kiddie Trike.