We went to our third AcroLove Festival this New Years weekend and it was our first attempt at two days in a row. I was nervous about how my body would respond by the second day. 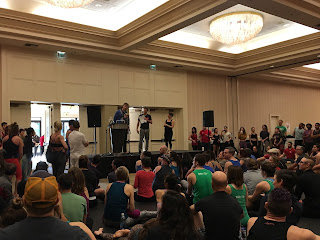 This was a great class where we learned a creative flow with several new poses and transitions, including a fun drop from Bird to Hanging Back Plank and a cool way to get to Star from Foot to Hand.  Besides the standing elements, the hardest transition for us was Star to Tuck Sit. Tori had to cheat a bit by quickly dropping her feet to rest on my knees.

This mostly hands-free washing machine class was the hardest of the festival for us. It involved a lot of delicate back and forth balancing of the flyer's sit bone on the ball of one foot. We were able to achieve several of the individual elements but weren't able to put them all together.

This was a fun class where Tori and I tried Foot to Foot for the first time. The hardest part was rolling over on our toes correctly to achieve a good foot position. We were pretty stable once we both extended our legs. We had good spotters so I got a chance to fly it as well. Very Scary!!

We then learned a Popping Throne Mount with some High Reverse Foot to Hand added to the mix. The next progression was the flyer jumping from the ground into Whale. I had to make sure I caught Tori with plenty of cushion as she landed with her back on my feet. Our last practice was popping the flyer directly into High Reverse Foot to Hand from the ground and then dropping back to Whale. With the longer hang time, it was easier to catch her in Whale. The teachers then demonstrated the pop directly to Whale, but the class ended before we had a chance to attempt it.

We learned four group washing machines in the last class of the day. The first was The Kate Machine with two flyers switching back and forth between the two bases in Straddle Throne and Shoulder-stand. The second machine was Mediterranean with the two flyers switching between Throne and Foot to Hand. Angry Birds was a popping machine with two bases and one flyer being tossed back and forth in Reverse Bird. The bases would turn the flyer around with Corkscrew before popping her back.

As preparation for the last Group Washing Machine, we learned a Reverse Bird Pop Dismount. I saw this fun trick a while ago and always wanted to try it. We then attempted Extreme Hugging where a flyer in Reverse Straddle Throne catches a second flyer on her lap. In the video below, Tori is on the receiving end of the extreme hug. I took turns basing both sides.

We both woke up extremely sore on Sunday morning. Tori's back was aching and my right hand was swollen from being kicked in the fingers so we decided to go back to bed. After sleeping in and eating a nice breakfast, we were revitalized enough to head down and catch another class.

Despite my soreness, I was able to stretch and loosen up enough to base confidently. It was an all-levels class with familiar poses but at least half of the transitions were completely new to us, including the Back Walkover to Throne. After they demonstrated Reverse Back Fly to Reverse Star, I volunteered to base while they showed the proper spotting technique. I was a bit nervous since I had never attempted that transition before.

I was able to base it with an advanced, intermediate and beginning flyer in a short amount of time and it was interesting to feel the different amount of effort involved with each one. I was also called back up to demo the last section of the Fun Flow.

After going home to take care of Tori's mom, we headed back to the Sheraton to ring in the New Year. 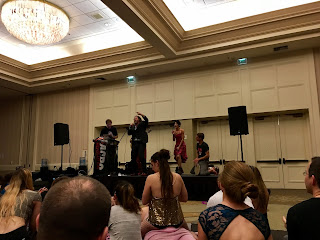 The night was a mixture of performances, singing and AcroOlympic competitions.

Free Star was the next competition. The announcers made it difficult by constantly requiring different variations of the pose. Our teachers from Saturday, Chris and Emily, outlasted them all. 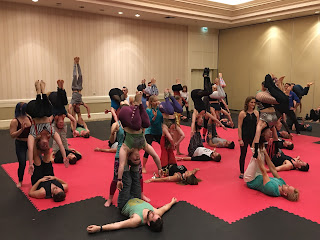 The Foot to Hand competition was equally varied with the bases having to go from lying down to standing more than once while the flyers danced. Matt and Liz won when the Liberty pose took down their final competitors.

Human Tower Stacking - Despite not building a tall stack with Two Highs, our group came in second with nineteen. The winners had twenty-four and had to recreate their tower in front of the stage. They even managed to add an extra person. 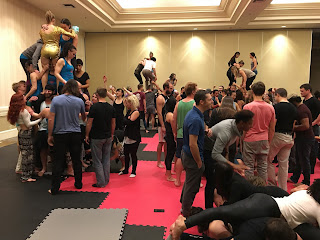 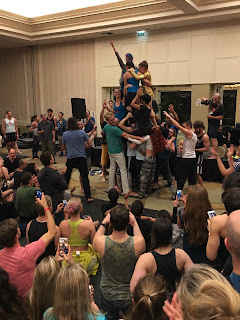 The final AcroOlympic competition of the night was Standing Hand to Hand. Matt and Liz won again with a time of 1 minute, 53 seconds. 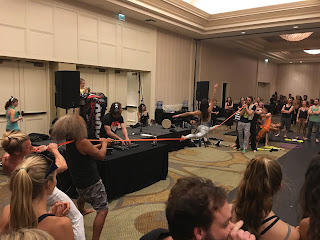 Tori and I counted down to midnight in Free Star. It was our most stable pose yet! 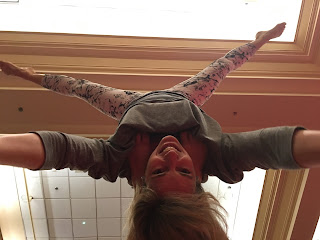 Posted by Noah Unsworth at 5:54 PM