Tori and I went for a last minute getaway to Las Vegas. We got a great price for our room at the Encore with tickets to Le Reve and four meals at the Wynn Buffet included. We drove out early Sunday with a stop at the Las Vegas Outlets and arrived just in time for check-in. It was an elegant suite on the middle floors with a divider separating the bedroom from the living room. While we had stayed at the Wynn before, it was our first time in the Encore. 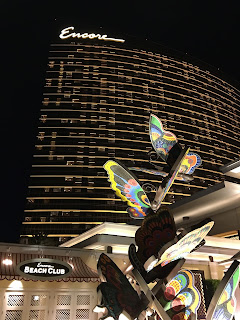 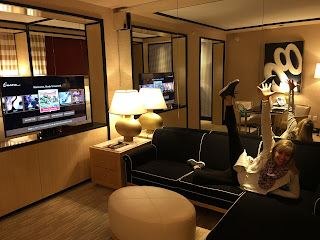 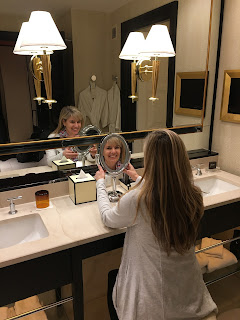 We had seen the Peppermill on Jerry Seinfeld's "Comedians in Cars getting Coffee" so we decided to eat dinner there since it was so close to our hotel. We got a booth right away in the tree-filled diner. Tori joked about me ordering a drink called the Bubblebath, but it intrigued me so I ordered it anyway. Very fruity! We shared a tasty Buffalo Chicken Wrap and a huge brownie sundae. We also checked out the Fireside Lounge in the back. 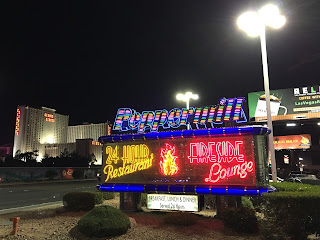 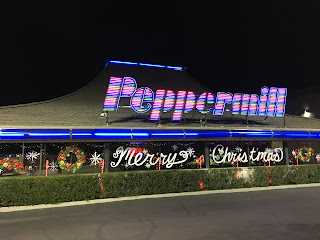 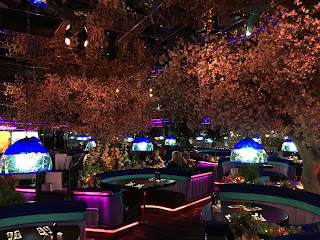 Walking back to the Encore, we continued on through the Palazzo shops at the Venetian. The Wrangler National Finals Rodeo was in town so the casinos and restaurants were full of cowboys wearing boots, belt buckles and ten gallon hats. The next morning, we had breakfast at Jardin in the Encore before driving over to spend a couple hours at the Imperial Health Spa visiting the variety of saunas and receiving a relaxing massage. 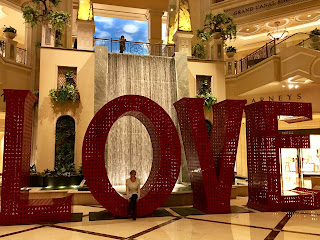 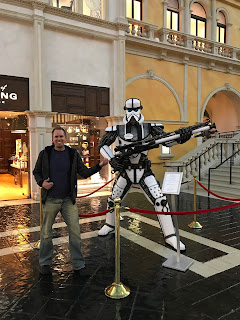 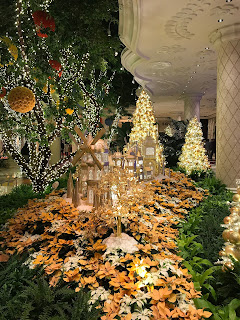 We skipped lunch to save room for the Wynn Buffet so we were starving by the time we went down at 5:30 for an early dinner. Normally, I tend to avoid buffets since I go overboard. We promised ourselves in the long line that we would try to stick to one type of cuisine. Once we got our table in the beautifully decorated main hall and grabbed our plates, we couldn't resist splurging since all the food looked so tasty. I tried to keep all my portions very small. The small cut of steak I had was my favorite. Perfectly flavored! We tried to save a little space in our bellies for the Dessert Room where Tori had a made-to-order crepe and I tried a small selection of cookies and pastries. 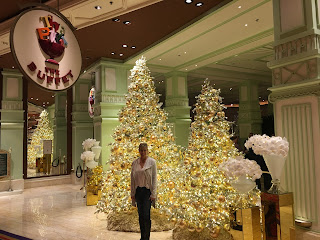 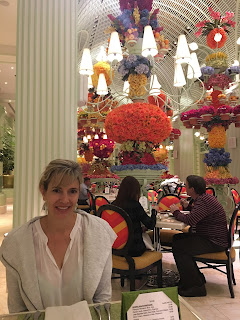 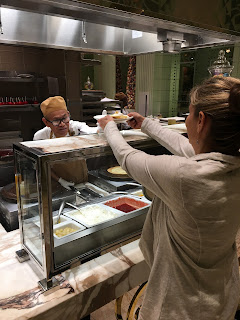 After relaxing for a bit after our big dinner, we went down to the Wynn Theater for the 9:30pm performance of Le Rêve. Outside was a sculpture of Popeye that I suspected was created by Jeff Koons based on his other work we saw at The Broad this summer. Turns out I was right, the artist built the stainless steel statue between 2009-2011 and Steve Wynn bought it for $28 million dollars. 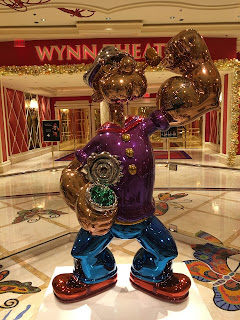 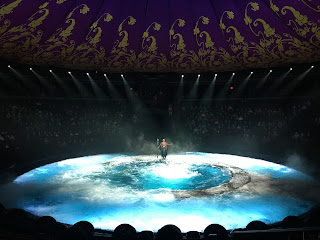 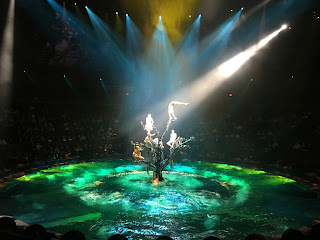 This was second time we have seen Le Rêve and I enjoyed it a lot more this time. Last time, we saw it the day after seeing my favorite Vegas show, Absinthe, so I may have compared it unfavorably. The production now encourages non-flash photography to share on social media so I didn't have to worry about an usher reprimanding me for sneaking a photo like the first time. Ha! I tried to not take too many photos. The hotel offers a diver's package to experience the show underwater. I would love to experience that someday. 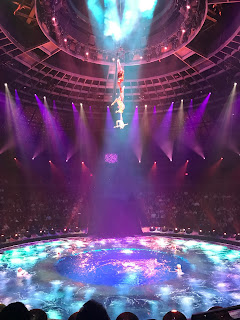 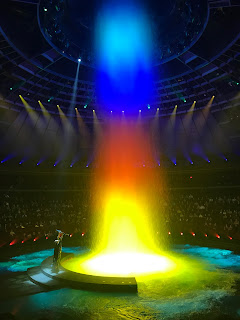 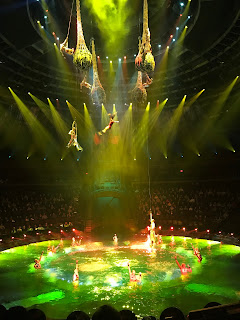 We had planned to take some AcroYoga pictures in front of our hotel window but since our view of the North Strip was pretty unspectacular we forgot about it until our last morning. We were both feeling pretty stiff, but I moved the couch out of the way and Tori jumped up on my feet for a few poses before breakfast. The view to the left was of Circus Circus and the Chinese-themed Resort World which has finally begun construction. Across from Circus Circus was a giant parking lot where the Riviera used to stand before the property was purchased by the Convention Center. The giant abandoned Fontainebleau tower was recently bought by new owners who also plan to begin construction soon on the unfinished resort. 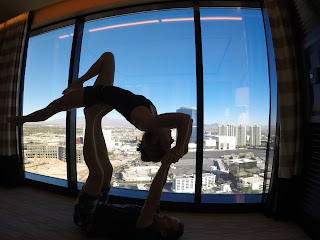 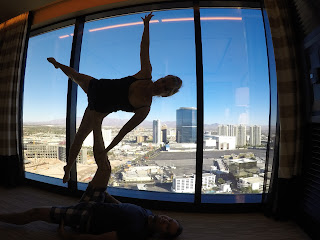 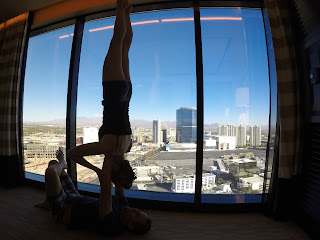 After AcroYoga, we went down for our last free meal at the Buffet. It was close to 11am by the time we got through the line and loaded up on Breakfast. I was surprised when I went back for seconds how quickly they had switched out everything for lunch items. Since I was still in the mood for breakfast I didn't eat much more which was probably for the best. Because our checkout was at 11:30am, we had to get back to our room pretty quick to pack. The drive home on a Tuesday was very smooth and we stopped for the Outlets at Barstow to buy Christmas presents.
Posted by Noah Unsworth at 9:41 PM