Tori and I have been working on the Corkscrew transition from Bird to the Star position for the last month. At the Swami's Jam today, we finally put a series of them together into the washing machine called High Barrel Rolls. We still need to learn the proper way to switch hand grips while transitioning through the Bird position.

As well as the acrobatic part of AcroYoga, there is also the more healing side which combines Thai massage and is called therapeutic flying or Acropeutics. During Amanda's Thai Massage class on Saturday, we learned a new position called the Hippie Twist. With my arms folded behind my back and my feet in the Straddle Bat position, Tori gently twisted my shoulders in the opposite direction of my hips by alternately bending her arms and legs. 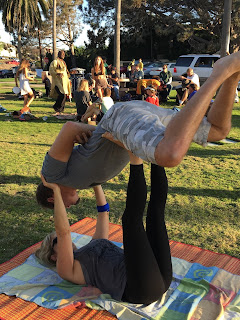 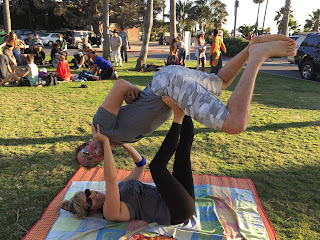 With singing and dancing in the Drum Circle behind us, Tori based me in Reverse Prayer before lowering me down for a quick kiss. 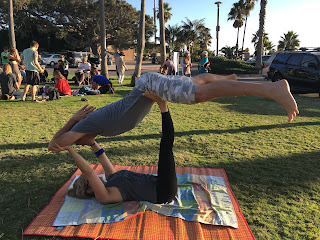 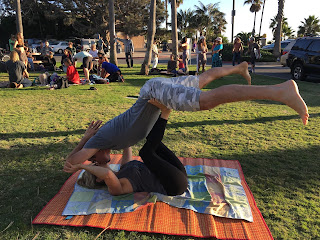 I have based Tori in several of these stretching positions many times so it was nice to relax as the flyer for the first time. I looked so huge draped over her feet in the SuperYogi position. 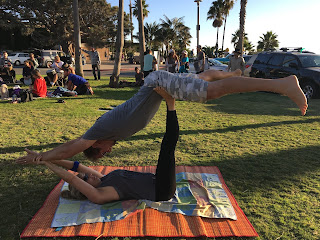 My friend, Chad, came to the jam and I based him in Star for the first time. Now I just need to convince him to come more often. 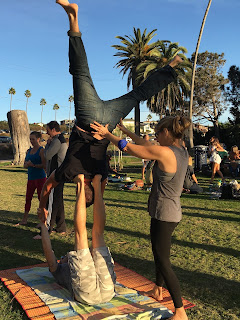 Tori and I have made a lot of progress in our High Barrel Rolls since we first tried the washing machine last October. The transition from Bird to Star is feeling more natural but I still need to focus on correct foot placement on the step back down to Bird.
Posted by Noah Unsworth at 6:11 PM