My surf trip to Fiji with my friend, Jeremy, was awesome. I have wanted to go there since seeing "Endless Summer II". There was some great waves, but there was a bit too much wind on two of the days. It was a very different sort of wave in Fiji as there are very few beachbreaks. I'd never surfed a reef break before where the waves form when swells come from the really deep water to the shallow reefs surrounding the islands. 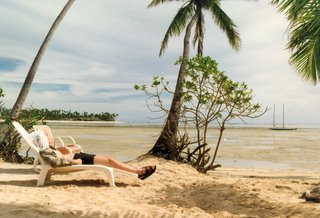 Big John would have to take us out in his little boat to Namotu (a nearby island) and we surfed a spot called Magics. The boat would anchor in a deep ocean channel outside of the island's coral reef, so it was a long paddle over to the lineup. It was a little scary jumping off the boat the first time because of the fear of sharks and no land close by to reach if necessary. 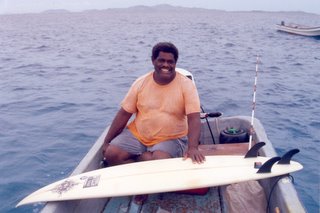 There was a powerful rip current out at the surf break and we had to paddle endlessly to stay on the peak in the lineup. We also had to be careful when we fell (trying to fall flat) so we wouldn’t hit the sharp reef with our bodies. The long paddle back to the boat after a long surf session was brutal, felt like my arms would fall off. It least the current flowed in that direction. There was more than fifteen people out there each time we went, very crowded for Fiji. Jeremy couldn't get the camera to load a new roll of film, so I missed out on getting pictures taken of me catching any waves. Bummer! 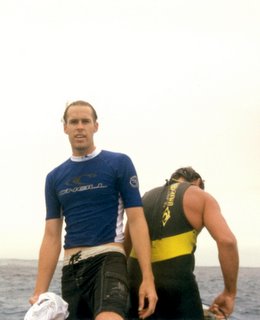 One of the night's we got to participate in a Kava drinking ceremony. Kava is a native drink made out of the root of the Kava plant that has an euphoric effect. To drink the Kava, we had to clap once, drink the entire cup with both hands, hand it back and then clap three more times while saying, "Maca". It tasted like the earth and it made our tongues and mouths go a bit numb. 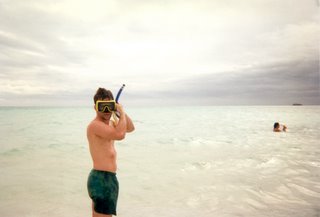 Jeremy and I went scuba diving and snorkeling in the warm waters of the island, Malolo Lailai, we were staying on. We also did a bit of kayaking and I tried windsurfing once. It's impossible. I don't think I ever went more than a foot. Maybe if I knew the basics of sailing I would have figured it out. It seems like allot of technique. 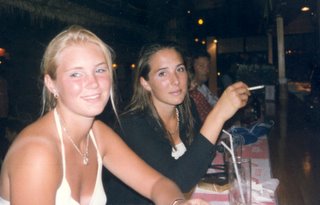 We didn’t get much sleep on this trip. We had to go surfing at 6:00 in the morning to catch the high tide and we would stay up late partying and dancing in the bar at the Plantation Resort. We mostly hung out with Darren & Karen from Australia and Georgie and Laura from Great Britain. It was rainy season in Fiji but it only rained on our last day of the trip. A tropical cyclone was supposed to hit the islands the day after we flew back to Los Angeles. 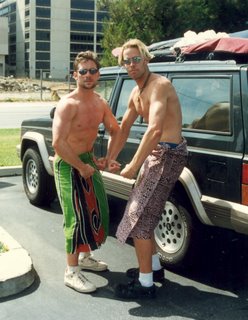 Here in San Diego everything is nice and sunny. Perfect weather, actually. After Jeremy and I got back from Fiji, we found out that we were having a ‘Red Tide’ at the beaches here. It was an amazing contrast coming from the crystal clear waters of Fiji to a deep rust color of the water back here. At night the ocean would glow and the waves would throw off sparks created by the electrolytes produced by the billions of plankton massed along the shoreline. It only lasted a few days and the ocean is now back to its normal green. Two friends of mine were stung pretty badly by the jellyfish that had come to feed on the plankton.
Posted by Noah Unsworth at 2:06 PM