I am writing from an internet kiosk thing in our hostel. 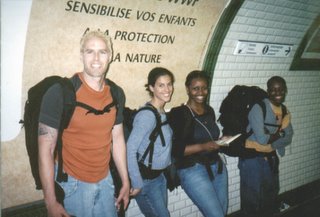 Chad, Fatima, Danielle, Lisa & I arrived in Paris around 1pm on Thursday. We flew in one of those new Boeing 777s. Pretty nice! The closest train station into Paris was closed so we spent quite a long time wandering around the airport lost, confused and tired. I ended up hitting my head when I walked right into a closed glass door. After finding our hostel, we cruised the Champs-Elysees all the way up to the Arc de Triomphe. I climbed to the top on a cool spiral staircase to see the great view. For dinner, I ate this delicious, ham and cheese grilled sandwich, called a Croque Monsieur. The rock hard salami baguette I had with it was not so good. We were really tired by the time we went to sleep around 12pm. 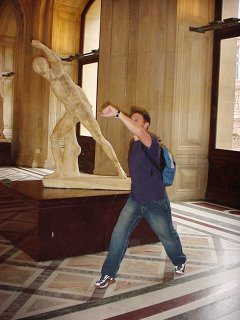 Friday started out drizzly, but it went away before we reached the Louvre. It is HUGE!!! I have taken so many pictures already. First thing, we headed to find the Mona Lisa, Venus de Milo, Winged Victory and then checked out all the paintings from Europe's 16th & 17th centuries. Lots of religious iconography. My favorite area was the large sculpture garden. Before heading over to Notre Dame, we had a nice lunch at a brasserie. I had a steak with pepper sauce. There was a children's choir singing in the famous cathedral when we arrived. We were going to go to the top, but we didn't want to wait for over an hour in the line. We had plans to go to a Jazz club, but the girls fell asleep too early when we went back to the hostel to rest for a bit. 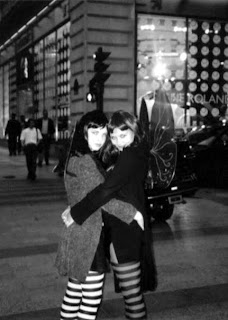 You can't go to Paris without visiting the Eiffel Tower. Chad, Fatima and I climbed the stairs up to the second level where we stopped for a chocolate croissant and an espresso before taking the elevator to the very top. Chad got a little freaked in the glass elevator. Heh! For lunch we stopped at a creperia before exploring more of the city. We ended up at the Hotel des Invalides to see Napoleon's Tomb and check out the French World War II museum. Our second attempt to go to a Jazz club was a success but it was hard to find tucked away in a side alley of the Rue de Lombard. They served a delicious hefeweiser-type beer and the music was good even though I am not a big Jazz fan. 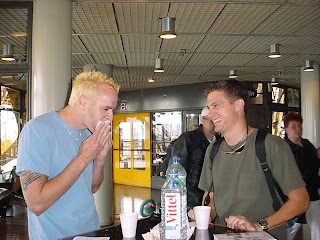 I still wasn't over my jet lag by Sunday. I was so tired I fell asleep on the train to Versailles, but I perked up by the time we arrived at the palace. First, we explored the large gardens filled with statues and elaborate fountains. We rented a boat to row around the cross-shaped canal at the base of the gardens. It was pretty funny when we accidentally rammed another boat and got cursed out in French. While touring the inside of the palace, I kept close to a English-speaking tour group as they explained what each room was for. The Hall of Mirrors was impressive, but I really enjoyed seeing the living quarters and the three huge murals commissioned by Napoleon. 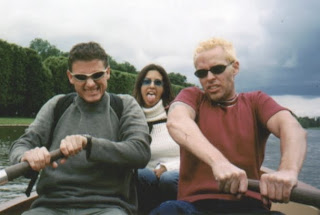 Arriving back in the city, we went to the district of Montmartre to see the shiny white Sacre Coeur Cathedral at the top of the hill. Nearby, I had my best French meal of the trip so far, but the service was really slow. After we were seated, it took about two hours before our food arrived. I am not complaining though, it was nice to relax for awhile. The girls wanted to go shopping, so I took the metro to see the Moulin Rouge. I would like to watch the show someday, but it is pretty expensive. 150 Euros! 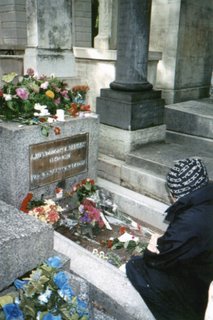 The World Cup has been going on while we are here. Team USA is doing well. Chad and I watched them score a goal against Korea before we went to pick up the rental car. It was very time consuming and it was crazy driving it back to our hostel on the busy streets. The traffic on the ring road circling the city was worse than Los Angeles. After five days together, we decided to split up for the rest of the day. After exploring the expensive shops near the Champs Elysees, I went to see Jim Morrison's grave at the Père Lachaise cemetery. I had a nice dinner at an Italian restaurant and read the International Herald Tribune. It was nice to have some alone time. Later, I stumbled upon an outside concert near the Hotel de Ville and I had a good time talking to a Portuguese guy who lives in the city. 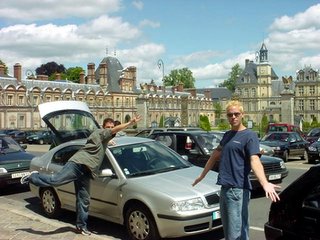 Tomorrow we are driving 35 miles outside of Paris in our rental car to visit Fontainebleau, Napoleon's Palace. I hope it is worth it after the huge hassle it was to pick up the car.
Posted by Noah Unsworth at 7:19 PM