This is my last night in Budapest. I have a early flight in the morning. 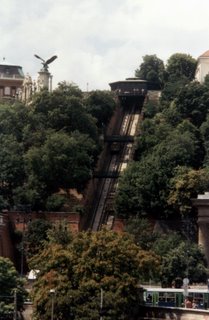 Last night I had a really good dinner at a nice Hungarian restaurant and as I was coming out I bumped into a guy named Tomo from Montenegro, one of the smaller areas of the former Yugoslavia. We ended talking for awhile about our two countries as we walked down the street. He has been working in Budapest for awhile in a restaurant. We ended up stopping at a bar and getting a beer and talking some more until about 1am. He was a real interesting guy. 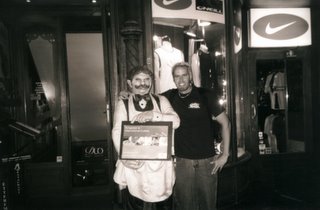 Earlier that evening, I was buying a postcard at a little street-cart when I noticed that the kid was playing hacky sack with himself while waiting for customers. After I bought the postcard we ended up kicking the hacky sack around together for about 45 minutes. His sister and her boyfriend who owned the cart ended up coming over also and we had a nice little circle going. I don't what else to say but I was having a blast.

I guess I will wrap up with some random sights I have seen the last day and a half.
-- I saw a man with no arms driving a three-wheeled motorcycle with his feet.
-- A group of kids break-dancing under a bridge. They were pretty good.
-- On Margaret Island in the middle of the river, they have a crowded jogging track that surrounds it. I was resting on a bench and watching all the joggers when a guy jogged by holding a sword and shield and wearing metal armor covering his shoulders and arms. I still am curious about the reason. 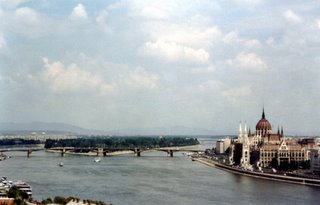 Well I am off to visit my last part of the city. A section of town that Tomo said was a cool place to hang out and get a cup of cappachino.
Posted by Noah Unsworth at 8:18 AM