I arrived in Prague after a being awakened by the train conductor with a breakfast tray and a steaming cup of coffee. I was lucky and got the three-bed sleeping compartment all to myself for the night. I was woken up only once when the Passport Check and Custom officials came aboard around 1 am. It was nice to get another stamp in the ol' passport.

I had another bit of luck when I arrived, for some reason I got bumped out of the 3-Star hotel I was booked for into their 4-Star hotel down the street. That's Fine with me! :) 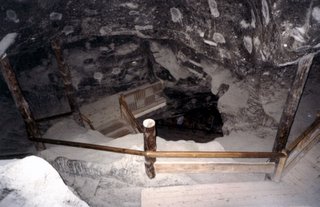 The visit to the Salt Mine the previous day was very interesting and I couldn't resist taking a lick on one of the passage walls. Diana, the polish girl on my plane, had told me she had done it, so I had to try it myself. Luckily I was carrying a bottle of water with me. My group ended up hiking down about 400 feet to the third level. The mine was full of statues that the miners had carved by themselves over the centuries. The ride back to the surface was quite fun as nine of us squeezed into a tiny metal cage-like elevator and wooshed up the mine shaft to the surface in complete darkness. 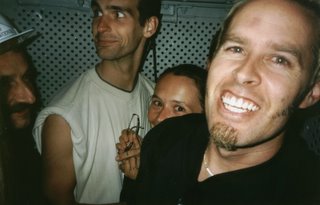 After the Salt Mine, I went to a nice Polish Restaurant that was recommended by the two British guys I met at the mines who have been living in Poland for a year teaching English. They mentioned this special lard spread that comes with the bread, saying it was very good, but obviously very bad for you. I was very hesitant to try it when they brought out the little pot of it. It looked like they had emptied out the grease pan into it with little chunks of who-knows-what inside. Anyway, I spread a little bit on a slice of bread, took a bite, and almost died. Never again!! :) The cheese, meat, & potato dumplings made up for it afterwards.

The highlight of my trip so far has been going out Thursday night in Krakow. I had seen the main tourist attractions of the town but I really enjoyed hanging out and talking with the locals. My biggest memory of the night was being squeezed into a booth with 4 very drunk, but very friendly Polish guys who knew about 5 English words between them. They kept sharing a plate of french fries with me as we struggled to talk to each other. I think they wanted me to drink vodka with them also but I was already pretty buzzed on beer. The polish girl who was in the group I had been playing foosball with earlier kept smiling and laughing good-heartedly from the bar as she watched me try to communicate with these guys. I ended up talking with her for a long while afterward. She is a Flight Attendant on Polish LOT Airlines, so she spoke very good English.

Anyway, it is a bit rainy here in Prague right now, but walking along wet cobblestones in a European city just seems right.

I visited the Prague Castle today up on the hill. It had great views of the city and I watched the changing of the guard outside. I stopped on the way down and had an excellent panini and some cheese cake in a little cafe before visiting the Museum of Medieval Tortures. It was a good thing I ate first or I would have lost my appetite for awhile. 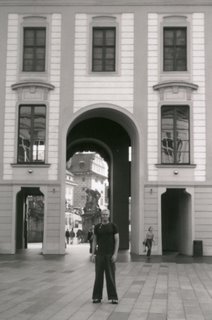 Prague is excellent city to just wander around in. The sun came out today. I saw this nice little Czech restaurant last night right as it was closing. I think I will eat there tonight.

Tomorrow I am going to check out the Alphonse Mucha Museum, the Czech Art Nouveau artist. I saw an exhibition of his in Balboa Park before and loved it.
Posted by Noah Unsworth at 10:53 AM