Well I am into my second day in Krakow, Poland and I have had a fun, crazy time so far.

My trip started out adventurous with me getting to the airport in Krakow in the middle of nowhere and everything was closed. I got lucky and a pretty Polish girl, Diana, that I met on the plane offered to drive me into the center of town to my hotel. I found myself crammed into a tiny, beat-up Russian car drinking Polish Vodka (it had piece of wheat in the bottle) with her three friends who had come to pick her up. She had just arrived home after working in Dubai for a year and her friends were real excited to see her. Her girlfriend was trying to teach me how to say, "I love you" in Polish as we got kinda lost trying to find our way to the center of town, but we arrived with a lot of laughs to my hotel. They had me take a picture of them in front of their Russian car which they nicknamed the "Russian Limousine". 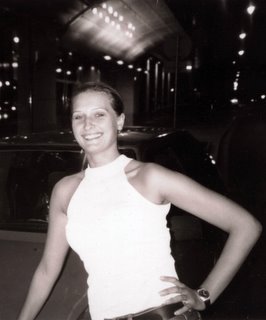 The next day I walked to the Train Station, where I must of looked very lost trying to find the correct train to the Auschwitz Concentration Camp when a older man offered to drive me out there for a reasonable price. After a little apprehension I accepted and I found myself in a little beat-up Polish car that sounded like it wouldn't make the hour-and-a-half drive out to the camps. The Polish countryside was beautiful though. My guide had a good English vocabulary but it was very interesting to talk to him because he seemed to only use nouns when he talked. Heh! He pointed out all the interesting sights on the way, and he had a funny habit of telling me exactly how far everything was from the center of Krakow in kilometers.

It was a good thing I took the guy's offer because the two main camps were both a mile apart and both a good couple miles from the little town's train station. The camps were very interesting but also depressing, but my guide took me all over each and gave me a lot of detailed information I might of missed on my own. I remembered a lot of the buildings and views from "Schindler's List", a good movie which was filmed there. 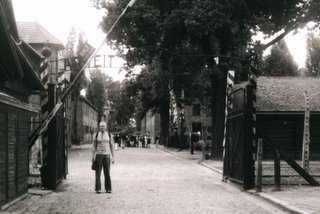 On the way back we talked about the Polish economy, his favorite classic-rock bands, and how much different electronics cost in the U.S. versus Poland. We also had to stop for a second time to put another quart of oil into his little car with its interesting zebra-patterned seat covers. He dropped me off in town at a little restaurant-bar where he helped me order a Polish meal and a beer. It was some kind of breaded pork-chop with potatoes. Very Good!!! 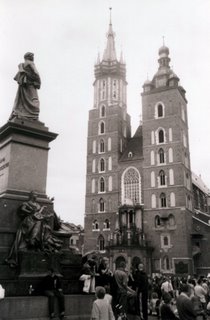 After a short nap, I went back exploring the main Market Square. After a cappachino to wake myself up I wandered into a bar where I met another American from Northern California playing darts with his three Polish friends. We all ended up over at the foosball table where we played for rounds of beer. Naturally my team kept winning :) until about the twentieth game where I started to get pretty buzzed from the strong polish beer. That bar closed so we all ended up at underground Irish Pub with many levels. I ended up finally leaving around 4:30am as the sky started to lighten into morning. I had a fun time talking to the interesting people.

I feel a little hung over this afternoon, but I just got done exploring the Wawel Castle built on top of an ancient "Dragon Cave" where according to Polish Myth a shoemaker was able to kill the dragon by feeding it tons of sheep with their wool soaked full of water. I might have the story wrong though. :)

Now I am off to explore the Royal Salt Mines in the nearby hills, and then I catch a night train to Prague.
Posted by Noah Unsworth at 5:03 AM