I have had three busy days in Cairns, Australia. It looks like the great weather has followed me from San Diego, the rain stopped and the skies cleared the day I arrived. Cairns is the major sugar producing area of Australia, surrounded by miles and miles and miles of sugarcane fields. 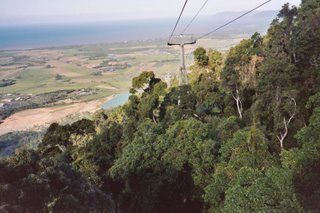 Today, I went white-water rafting on the Tully River. It took 4 hours with a half-way stop for lunch. I managed to stay on the raft through the rapids except when our river guide, Nick "the Prick" flipped us on purpose. (That's what he wanted to be called. Heh!) One of my favorite parts was standing up in the raft as we went under a waterfall. 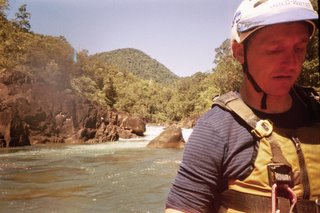 Yesterday, I had two scuba dives out in the Great Barrier Reef. It was the most amazing visibility I have ever seen. We rode a huge cateraman out to a floating platform moored on the outer Agincourt Reef. It was quite the operation with scuba diving, snorkeling, an underwater submersible and even helicopter rides from a floating helo-pad. I would have like to try some of the other options but the diving took up all my time. My favorite dive was the first one. We took a smaller boat further out to a spot called "The Point" on Phil's Reef, where we dove down to 60 feet and explored along the edge of the reef. I didn't see any reef sharks. Bummer! 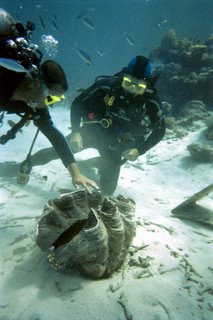 The first day we took in some Aboriginal culture. We watched some spear throwing. It was amazing how far and how accurately they can toss them. We also got to watch and throw some boomerangs ourselves. We also watched some Aboriginal dancing and I was pulled up to give it a try myself at the end. I think I did pretty well. :) We finished with a cable car ride over the top of the rain forest. It was pretty cool. 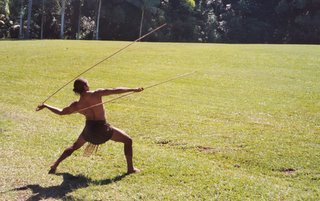 Tonight is our last night in Cairns. Tomorrow we take the bus down to the Whitsunday Islands for three days. I am going to spend one of the days on a sailboat exploring the islands.

Australia Animal Watch: So far I have seen a Koala Bear and a Bandicoot, but no Kangaroos or Crocs yet.
Posted by Noah Unsworth at 10:10 PM