I completed my first Olympic Distance Triathlon on Sunday. It was the Jamba Juice Wildflower Triathlon held at Lake San Antonio in Monterey County in Central California. It is 1.5k Swim, 40k Bike and a 10k Run and the course is brutal with lots of hills. 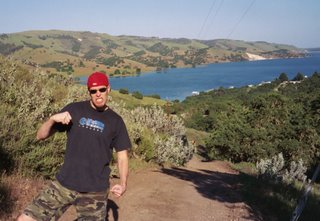 I drove up with my friends, Chad and Fatima on Thursday and we set up our tents in the G Loop of the Redondo Vista campgrounds. We found a fairly level spot in the hilly area with a nice moss-covered tree for shade. Fatima was part of the Team in Training group for the Leukemia & Lymphoma Society so we were camping in the same area as them. Jessica and her boyfriend, Matt, arrived early the next morning to share our spot. 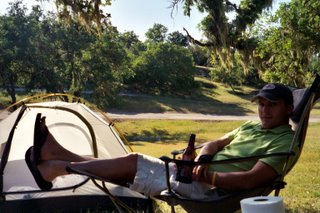 On Friday, I started to go on a training ride with Chad and Fatima and the rest of the TnT group but my rear tire blew out with a loud bang while we were going down Lynch Hill. I was able to buy a new tire at one of the Expo tents for $45 and Chad put it on for me. Later in the day, we all went for a nice training swim in the lake. I got to test my new swim wetsuit. It was nice and comfortable and I could really feel it's effect on my swimming. 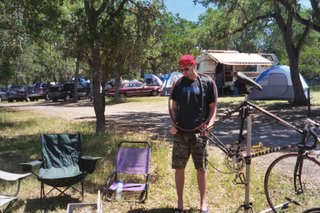 Saturday, I got to watch Terenzo Bozzone of New Zealand win the Long Course Race, breaking the course record in the process. (Finish Time - 3:54:43 for 1.2 mile Swim, 56 mile Bike & 13.1 mile Run) I got a nice picture of him high fiving the crowd as he came into the finishing straight. I also got a high five from him as he came out for a little victory lap. He wrote an interesting article about his race here called "When It All Goes Your Way" 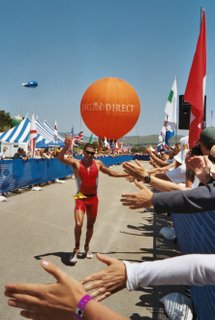 The 13 mile Run for the Long Course ran right near our campsite and it was fun watching all the participants running past for hours after the professionals had already finished. That night, a large group of the Long Course racers streaked through the large dinner tent where we Olympic Distance racers where having a meeting. It was pretty funny, but too many male streakers for my tastes. Heh! 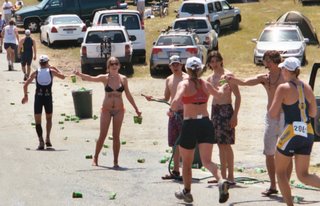 Sunday morning was the Olympic Distance Triathlon and I went down with Chad to the transition area around 8am to set up for our race start. Chad and I were in the 9:40am wave wearing the white caps. I was near the front row when the horn went off and I got off to a good start out ahead but my goggles kept filling on my right side. With the rest of the swimmers in my wave rapidly bearing down on me, I had to make a couple of quick pauses to adjust my goggles before getting run over. I was able to fix the problem and I got into a good stroke for the rest of the swim and came out of the water surrounded by mostly green caps of the wave that left 5 minutes earlier. 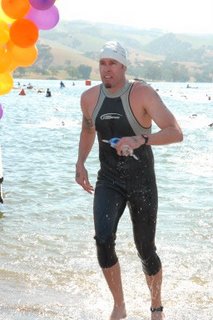 My legs felt really fresh as I jumped on my bike after the swim but having to go up the steep Lynch Hill first thing out of the transition area was pretty rough. I really enjoyed the bike course, tough and challenging but fun all the same with lots of rolling scenic hills. I spotted Chad on his bike on my way back from the turnaround point after climbing one of the longest hills on the course. I wish I had a few extra gears on my bike because I found myself having to stand up on my peddles on several of the steepest sections of the course. 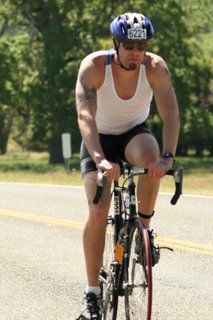 My transition times suffered a bit because I made sure to slather on extra sunscreen each time through, but I glad I did it because I escaped a major burning. My run started out better than I expected from my experiences in earlier triathlons. Doing brick training really helped get rid of the feeling of running with anvils in my shoes after getting off the bike. But soon I started to suffer and I found that I had to walk on the hills. The sun was blazing and the long 2 kilometer hill at the halfway point was brutal so I appreciated the aid stations giving spray downs with a hose as I ran by. I think I dislike going downhill even worse and running down Lynch Hill to the finish line was torture on my knees and feet but I made it across the line. The cold, wet towel they put on my head after the finish was heaven. 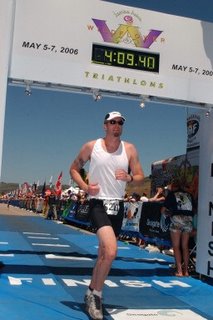 Climbing the steep hill back up to our campsite was not that fun, but we broke down camp fairly quickly and we were on the road by 6pm. We stopped for a quick bite at Taco Bell before driving down to Santa Barbara where we had hotel reservations. We went out for pizza and crashed pretty early that night. In the morning we had a nice breakfast before finishing the rest of our drive back down to San Diego. 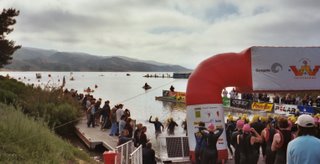 For more in-depth report of the Wildflower race check out Fatima's posts at Dolphins Name Themselves. She kicked ass in the race.