Why do I torture myself? I had no plans to bike up Palomar Mountain at the beginning of the day, but I ended up near the top with no water while riding a bike with a bent back wheel that rubbed against the brake. The Tour of California was coming to San Diego for the first time on Sunday and Lance Armstrong, the seven-time Tour of France Champion, was back from retirement. I couldn't miss it. 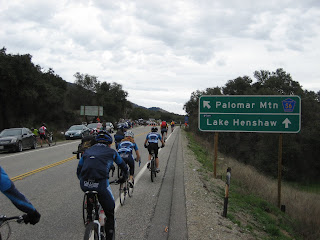 The Tour was going to climb up Palomar Mountain in the final stage of the week-long race. This was a "Beyond Category" climb and mountains are the best place to watch the racing action because the riders are split up and moving slowly as they try to reach the top. I have watched all of Lance Armstrong's races in the Tour of France on TV and this was my first chance to see him race in person. I got up early and parked on the race route about a half mile from the base of Palomar Mountain before they closed the roads. 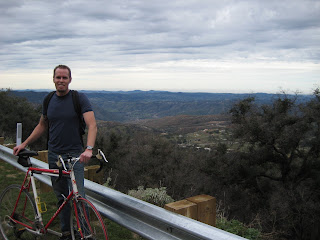 I had over five hours to kill until the racers passed so I decided to ride up to the base of Palomar Mountain to check things out. I joined the constant stream of bicyclists who were heading up the road to get a good viewing spot. I didn't think I was going far so I left my two bottles of water in my Jeep. I ended up going higher and higher as I kept saying to myself, "Just one more switchback." The spectators on the side of the road cheering and ringing cowbells helped keep me motivated, but I had to stop several times to rest. It's been over two years since I've been on a bike ride. 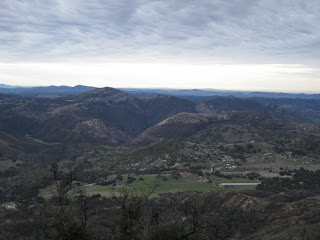 After I passed 4,000 feet, I was really hurting. I was fighting dizziness and was really thirsty. A biker who asked me to take his photo shared some of his water with me and I was really grateful. I finally found a good corner to stop at with not too many people a few more turns up the road. It had a great view of San Diego County. I could see Downtown San Diego, Point Loma and the Coronado Islands in the distance to the south and the Encino Power Plant in Carlsbad to the west. As it neared 2pm, we started to hear the helicopters and spotted the peloton down in the valley. The police began to clear the road of bicyclists and we followed the progress of the racers on the visible sections of road below us. 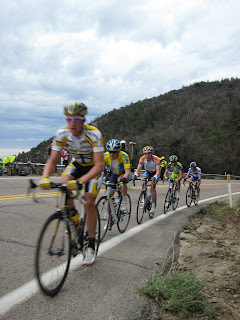 Luckily, I think I ended up at a perfect spot on the mountain to watch the race. Jens Voigt, 4th place in the overall race standings, attacked the peloton half way up the mountain. This caused Levi Leipheimer who was wearing the 1st Place Yellow Jersey to chase after him with the riders who were in 2nd and 3rd place, Dave Zabriskie and Michael Rogers. They caught Jens before the top, but they passed my spot on the mountain in small separate groups. I went to the inside corner of my turn and got several great pictures of the racers, including Armstrong, passing right beside me. 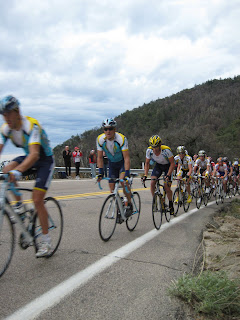 I was very sore but I am glad I made the climb up. It made me appreciate the talent of the competitors as they raced up the 21 switchbacks of South Grade Road at an unbelievable pace. The last big group to go by was the Gruppetto. It is mostly filled with the fast sprinters who don't climb very well and help pace each other over these big mountains. I spotted the best sprinter in the world, Mark Cavendish, wearing the Green Sprinter's Jersey at the back of this group. After the last rider, Fast Freddy Rodriguez who is a good sprinter but lousy climber, passed us I was able to descend the mountain. It was a little scary with my bent back wheel wobbling like crazy. I joined the big crowd at the bottom to watch the racers zoom past at high speed as the headed to the last climb on Cole Grade Road. 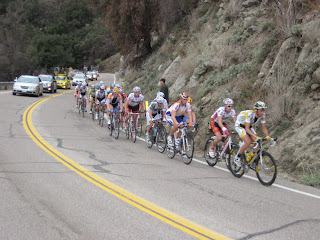 I spent over an hour in bumper-to-bumper traffic driving back to the I-15, but it was worth it. I taped the race, so I was able to find out that Frank Schleck from Luxembourg won the 8th Stage after I got home. I also saw myself on television when Levi Leipheimer, the overall winner, passed by me as he was climbing Palomar. Pretty cool! Levi's team, Astana, with Lance Armstrong won the race's Team Competition.
Posted by Noah Unsworth at 10:59 PM