Halloween in the Gaslamp Quarter 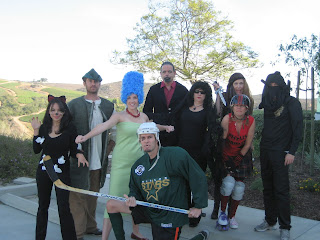 I got to wear my costume for two days this Halloween. A bunch of us dressed up a day early at work and I went down to the Gaslamp Quarter with Doug and Louise on Saturday night. Before heading down on Saturday, I went for a another 24 mile bike ride to Torrey Pines. I've been biking there every weekend for the last month and I have seen a big improvement. This time, I was able to reach the top of Torrey Pines without having to drop down to my easiest gear. 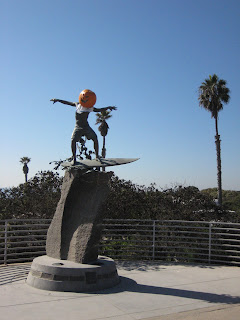 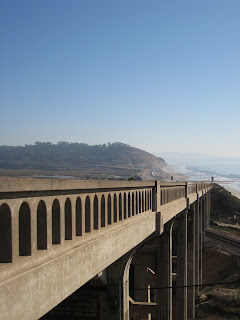 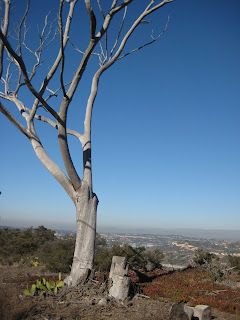 We arrived downtown at the Gaslamp Quarter pretty early and stopped for a couple beers and bowled some games at the East Village Tavern. I was surprised I was able to bowl so well wearing my hockey helmet and shoulder pads. The streets were starting to fill up with cool costumes when we went for dinner at La Bocca. All the restaurants were wearing costumes but the best was the sushi bar where all the chefs wore prison outfits while the servers and hostesses had police uniforms. 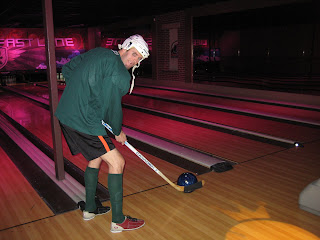 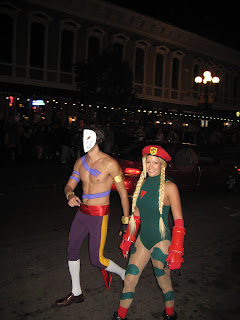 The streets were packed after dinner and we joined the parade of costumes going up and down 5th Avenue. There was a great mix of clever, sexy and the profane. My favorite were two tall guys jogging down the street in 70's style basketball uniforms with Afros and headbands. I liked the topical costume I saw of the Balloon Boy, Falcon Heene, with a shiny balloon constructed of tin foil hovering overhead. Fun night!
Posted by Noah Unsworth at 9:18 AM