Chad and I drove up to Los Angeles on Saturday to meet Greg at Universal Studios. So we didn't have to pay for parking twice, we went straight to the Universal Hilton where we were able to check into our room early. Since I haven't been to the park since the 1980s, I've been eager to go for a while now. The last time I tried in the '90s, we arrived to find it closed for a special Power Rangers event. After Greg arrived, we walked over to the park to get there when it opened. 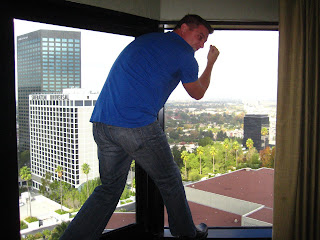 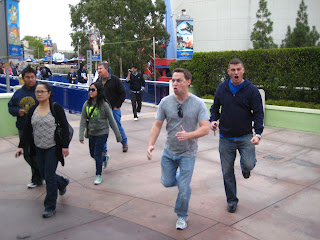 Inside, we made a beeline for the Studio Tour. Heading downhill, the tram starts off in the Front Lot with not much to see except the plain tan exteriors of the massive sound stage buildings. (If only we could go inside one during a shoot, but it would probably be too disrupting.) Passing the production bungalows in the middle, we cruised the perimeter of the huge outdoor sets on the Back Lot, rebuilt after the 2008 fire. Most of the streets are very generic so they can be customized for each shoot. An upcoming film was being shot in the middle as we passed, so we could see piles of rubble strewn around. It was great to see some of the classic attractions like Jaws, Bates Motel, Flash Flood, and Earthquake again. The Parting of the Red Sea has been updated with a miniature of Skull Island from the King Kong movie. The new Fast & Furious stunt car demonstration was underwhelming but I liked seeing the airplane crash set from War of the Worlds. I've never watched Desperate Housewives, but it was interesting driving down Wisteria Lane, a perfect little suburban street in the middle of the studio. 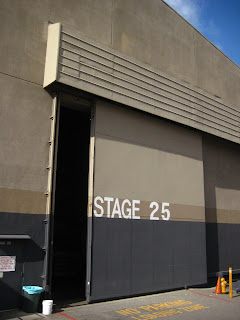 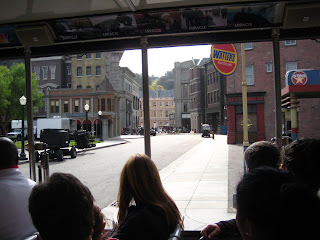 The best part of the Studio Tour and probably the entire park was King Kong 360 3-D. While I thought Peter Jackson's King Kong film had some problems, Kong's encounter with the two T-Rex's was thrilling and this new experience captures the essence of that best scene and throws you right into the middle of it. Since the action scene is occurring on both sides of the tram, there is almost too much to see. After a raptor attack, I missed the gorilla's entrance on the far side because I was too distracted by a T-Rex roaring and showering spit on my face from the left. It was awesome as Kong climbed back and forth across the tram car while it fought the dinosaurs, knocking our vehicle off a cliff into the hanging vines below. The motion control was excellent, every movement enhancing the illusion of danger. If it wasn't in the middle of the long Studio Tour, I would line up to do it several more times to get a chance to see everything from different spots on the tram. 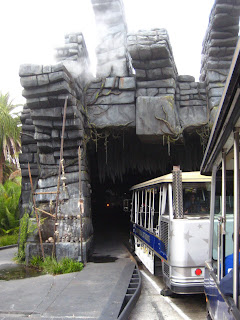 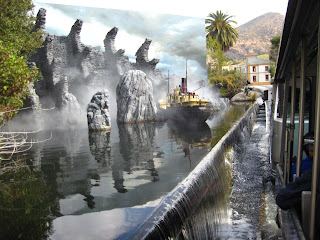 After the Studio Tour ended around noon, we got some food and beer before heading over to see Terminator 2: 3D. Since we were a little early we hung out for a bit on the fountain terrace overlooking the sound-stages and back lot sets of the studio below. Chad got tricked by one fountain as it soaked the front of his jeans. The Terminator 2 show itself is a mixture of 3D movie and live actors and animatronic terminators on a stage. It was entertaining, but the storyline was a little weak and the decade-old 3D effects have not aged well compared to the newer 3D technology. One interesting part was the use of scent in the presentation, especially the strong smell of gunpowder during the gunfights. 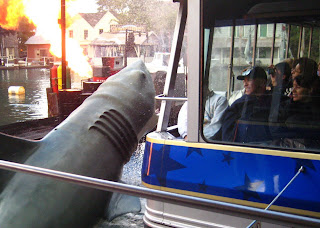 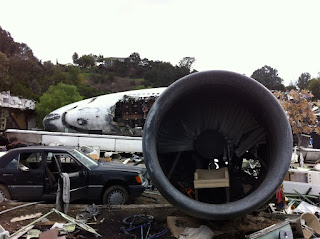 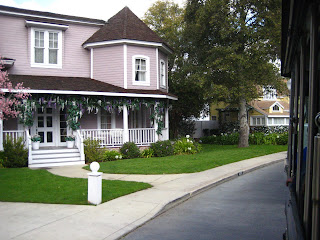 The exterior of The Simpsons Ride was great, recreating the entrance to Krustyland with a Kwik-E-Mart just outside. The ride had the longest line of the entire day, but it was the most entertaining as well. Monitors played clips of classic Simpsons episodes along with new scenes of Krusty showing off different parts of his new amusement park. With so much material, I never saw a repeated clip. While the ride is one of those motion simulators instead of an actual roller coaster, it is the best of it's type I have ever experienced. Joining the Simpson family on an insane roller coaster at the beginning, the ride soon goes haywire as the nuclear waste material stored underneath Krustyland starts to cause havoc on the park and surrounding Springfield. Very fun! 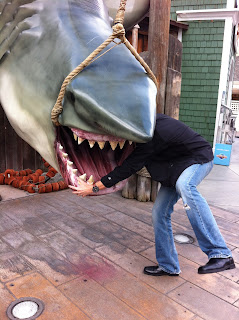 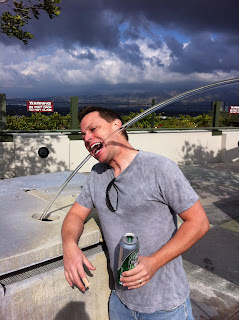 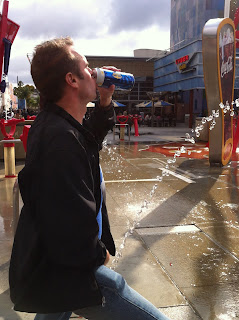 One of the best things about Universal Studios is that you can walk around the park while drinking the 24oz. beers they sell for $10 bucks. It felt a bit like we were in Vegas. We had our second while waiting in line for WaterWorld. I definitely had a good buzz as we entered the amphitheater to watch the stunt show. We made sure to get seats out of the splash zone. It was a good show but the most exiting moment was when a seaplane exploded over the atoll wall to splash-land into the water below us. The only distracting element was the main villain's voice sounded too nice. 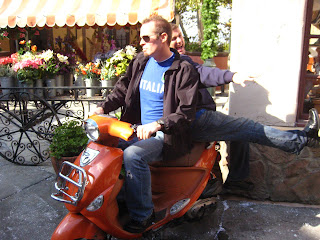 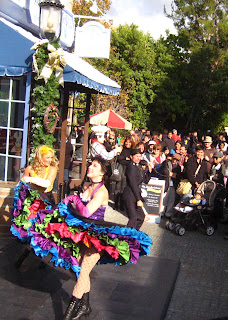 Since it was a cold day, we debated whether to go on Jurassic Park - The Ride in the lower lot. After taking the stairs down, we checked out the splashdown area before making our decision. It didn't look like too much of a soaking, so Greg and I went while Chad sat this one out. It had the shortest line of the day and while we meant to sit in the back, we ended up at the front of the raft. It was a short ride, but it had a great atmospheric design from the movies with plenty of animatronic dinosaurs. The lunging attack of the T-Rex at the end was a great distraction before the final 84 foot drop that sprayed us in the face pretty good. My young nephew is scared of rides, but loves dinosaurs. I wonder if I could have gotten him on this one. 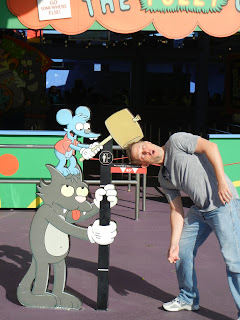 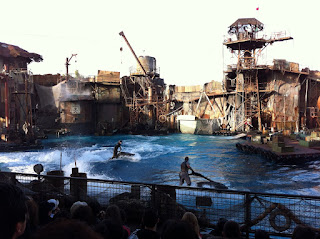 There was a much longer line for the nearby Revenge of the Mummy - The Ride. A very fun indoor coaster ridden in almost complete darkness. It reminded me a lot of Space Mountain. At the halfway point, it stoped in a tomb where we felt scarabs crawling on the back of our legs before it launched us backward along a track to the finish. As we waited for an extended time in total darkness at the end, we thought it was part of the experience until an announcer let us know the ride would continue shortly. If there was a shorter line, I definitely would do that one again. 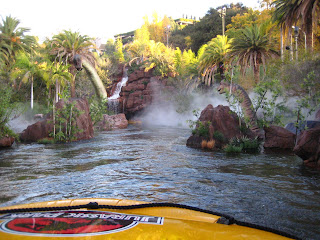 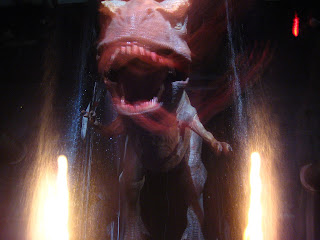 The sun was setting as we returned to the upper lot to visit the Special Effects Stage. It was a decent show showing the basics of special effects with volunteers picked from the audience for short demonstrations. I wish Universal Studios still had the Airport '77 show in the Screen Test Theater. I thought that was a much more entertaining way of revealing movie magic tricks. We ended our day at the park with Shrek 4-D. It was very funny short film that takes place directly after the wedding in the first Shrek. With moving seats and blasts of water and air, it's a good thing we were wearing 3D glasses because we were sprayed in the face at least three more times. With the temperature dropping rapidly outside, the icy water felt pretty brisk. 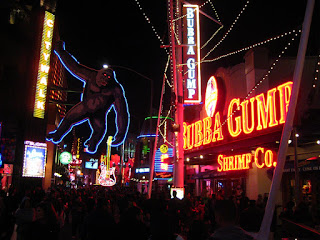 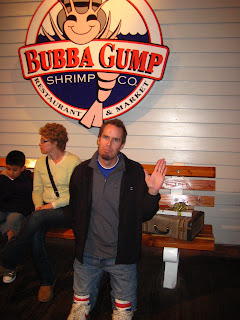 After walking back to the hotel to get some warmer clothes, we headed over to Universal CityWalk to get some food at Bubba Gump Shrimp. The Cajun Shrimp appetizer was amazing and I had the Lt. Dan's Drunken Shrimp for the main course. We ended the night at the bar in Jillian's. On Sunday, we woke up to heavy rain. We lucked out and beat the weather by one day. Driving home with Greg, we ate lunch at Portillo's. I have to stop for their Italian Beef sandwich every time I pass Buena Park. So good!

Posted by Noah Unsworth at 8:42 PM