For our Valentine's dinner on Saturday, we made reservations for Herb & Sea on their first day reopening after the winter shutdown. While we have never had dinner at Brian Malarkey's new restaurant, we enjoyed a delicious brunch here before the pandemic started. (We are in the middle of watching the 3rd season of Top Chef where Brian made his first appearance.) There is still no indoor dining in the art-deco building, but we sat out on their new Moonlight Deck, a raised wooden patio built in the parking lot with an enjoyable ambience. We both started with the tequila cocktail, Fire & Nice, to go along with our first course, the Blistered Tomato & Burrata Salad and the Baja Shrimp Cocktail.  The salad was tasty but we loved the combination of horseradish and citrus with the shrimp. 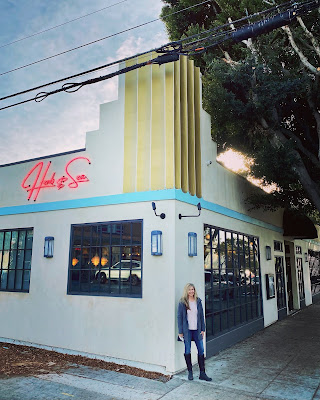 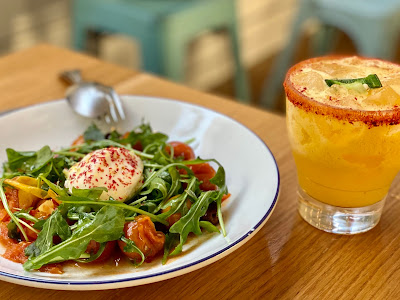 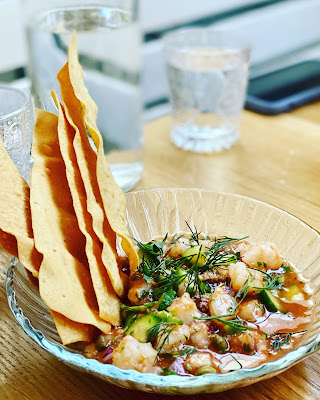 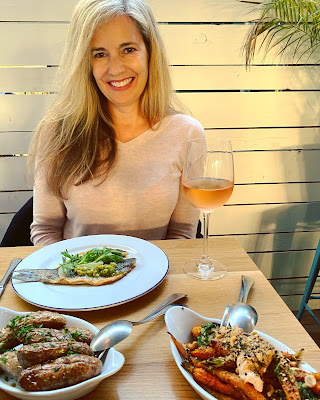 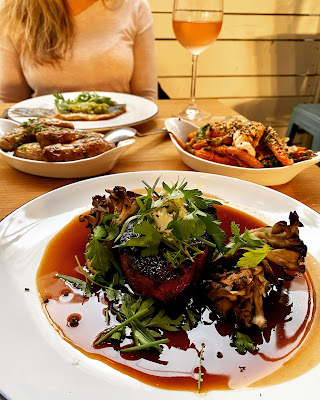 They were serving their Valentine's Weekend Prix Fixe instead of their regular menu so Tori and I had our choice of four entrees. While I picked the Filet Mignon, my wife ordered the Plancha Whole Fired Branzino. My steak was cooked perfectly and Tori shared a bite of her fish topped with Castelvetrano Olives and Calabrian Chilis. I don't eat a lot of fish, but I thought it tasted delicious. Our family-style sides were the Roasted Fingerling Potatoes and the Roasted Baby Carrots. The potatoes were good but we loved the tender carrots topped with Aleppo Yogurt, Carrot Top Pesto and Dukkah, a Middle-Eastern mixture of herbs, nuts, and spices. We shared the Chocolate Lava Cake, topped table-side with raspberries, creme anglaise, and chocolate sauce. Tasty, but not too rich after a large meal. 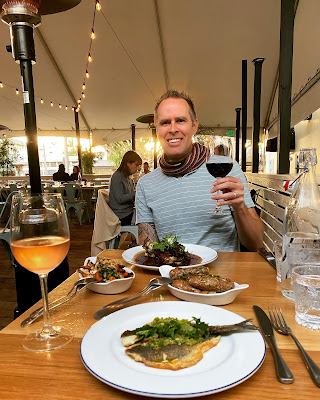 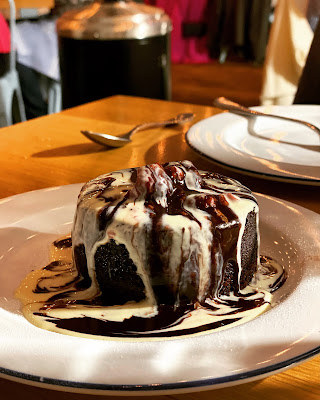 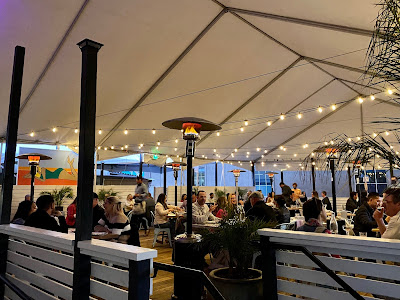 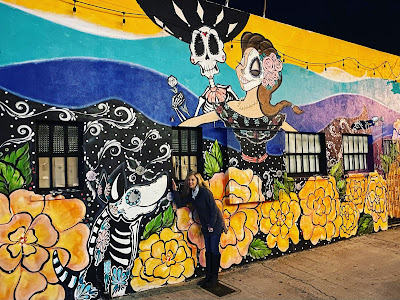 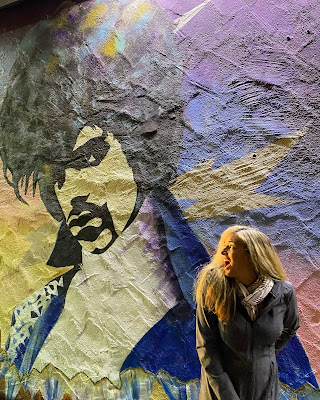 While we had our romantic dinner a day early, on the actual Valentine's Day we went for a hike at Veterans Memorial Park in Carlsbad. The 1.5 mile loop has great views of the Agua Hedionda Lagoon and the Encina Powerplant that is in the middle of being demolished. I will miss seeing the 400 foot smokestack along the coastline. While some may see the tower as an eyesore, I have always found it a cool reference point to orient myself. After circling the loop, we used the tunnel to pass under the road to hike the Golf Course Trail up the other side of the small valley to the Crossings at Carlsbad clubhouse. With the added out & back trail, our total hike was 3.3 miles total. 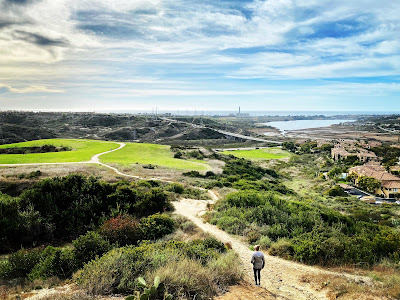 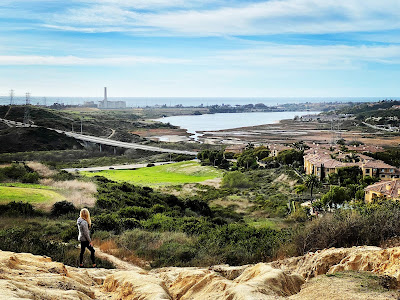 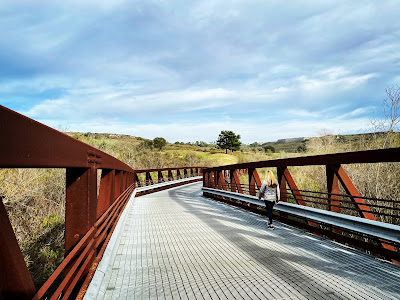 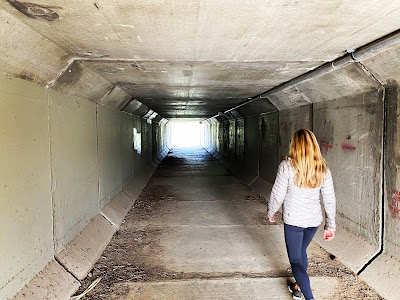 Since it was a little overcast during our first hike, we returned the following weekend to hike the loop again under clearer skies. At the top of the loop, there is a great view eastward of the dormant Calavera Volcano. While I could also see the farmland visible from my office window, I could not see our hidden building with my camera's zoom lens. 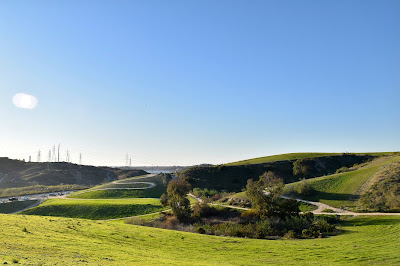 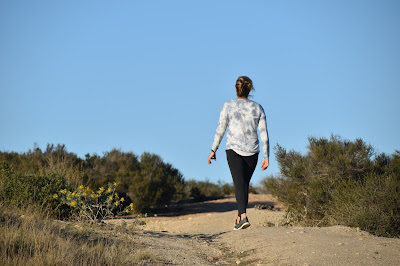 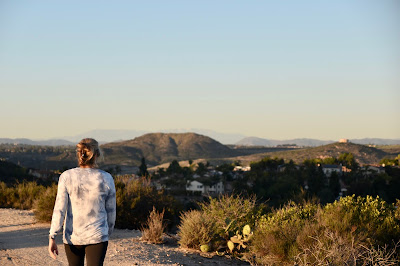 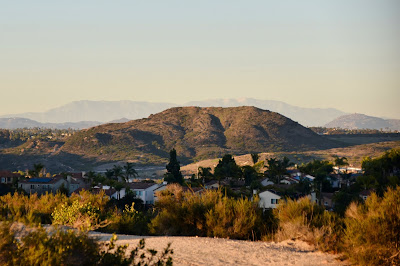 After the recent rains, the graded section of the undeveloped park is covered with green grass that is normally dead and brown during most of the year. The City of Carlsbad has plans to transform the site into a finished park with a veterans memorial, playgrounds, picnic areas, rock climb, bike course, fitness areas and restrooms. The Master Plan was completed in January 2021 and will be voted on later this month. 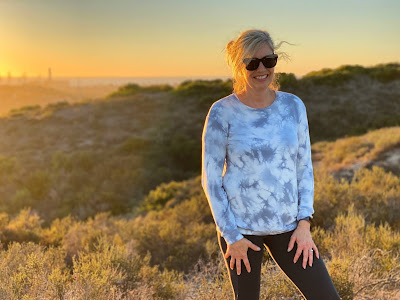 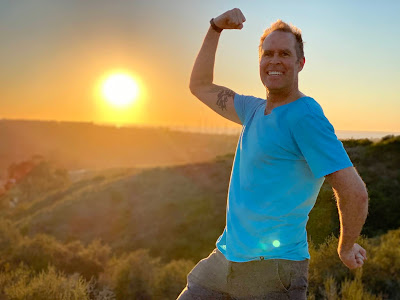 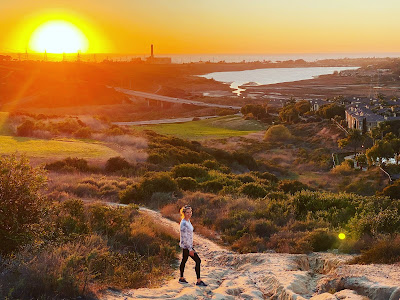 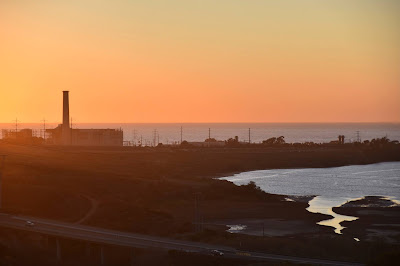 We ended up circling the loop twice to watch the sunset over the Pacific Ocean. In the last photo, you can see that almost half of the 1954 power plant has been demolished. There are plans to replace it with a smaller 588-megawatt plant next to the new water-desalination plant that was constructed in 2015.

Posted by Noah Unsworth at 2:02 PM