This is our second day in Barcelona. It was a long train ride with standing room only, but the views of the countryside as we crossed over the Pyrenees into Spain made up for it. We are staying at the Pension Fernando, right off of Las Ramblas, the tree-lined main street. I have wanted to come to this city since watching the 1992 Olympics. 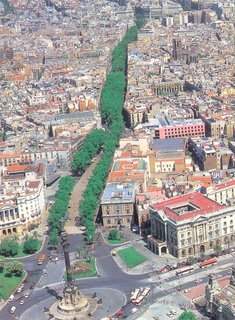 It was beautiful today, so we went to the beach. It was my first time at a beach with topless women so I tried hard not to stare. Lots of boobs.

We had our backpack ripped off. We were sitting resting on some steps and Greg had the pack sitting between his legs when a guy came over from our left asking for a cigarette. He chatted with us for a minute, distracting us while his friend snuck up from the right and snagged the bag. We didn't notice it was missing for a few minutes after he left and then we ran around looking for him. Greg was really pissed. The backpack had the camera with allot of cool pictures in it, my sunglasses, and my walkman. The worse loss for me was all the pictures we took in Tours, Bordeaux and here in Spain.
Posted by Noah Unsworth at 3:27 PM