We went to the huge sand dune, La Dune de Playa, in Arcachon about an hour's train ride from the city of Bordeaux. It was amazing and 117 meters tall at its peak. We took some cool pictures from the top as we took turns making huge leaps down the sand faces. 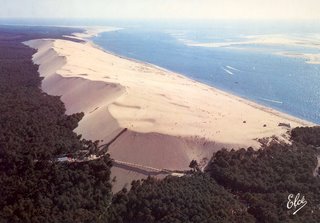 When we got back to Bordeaux, we went bar-hopping with two girls we met from Colorado and two French girls that are students here. They were fun. We ended up staying out until the sun started to rise in the morning. It started to rain on Sunday so we just slept most of the day to catch more sleep as we are still very jet-lagged.

We stayed at the Maison de Estudiants which is student housing during the school year but rents rooms to travelers during the summer when most of the students are gone. I tried speaking some French at a nearby store with my phrase book but totally failed. Heh!