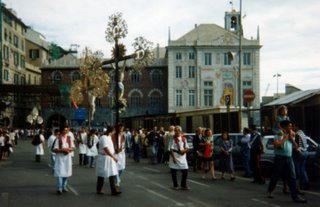 We arrived in Genoa, Italy on Saturday. There was big parade for the patron saint of the city. It had big wooden crosses that were 15 feet high and really heavy. A man would carry one in a harness with his hands behind his back and supporting it with his head only. Fireboats were spraying water in high arcs in the harbor. 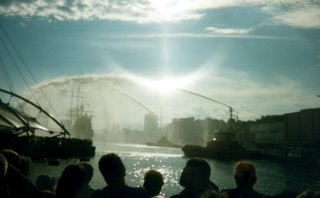 We met up with Wendy and Carey, the two girls from Colorado we met in Bordeaux and walked around the city. We tried the Italian Gelato and were blown away. Wow!! I also had Pesto for the first time for dinner. I guess it was created here. 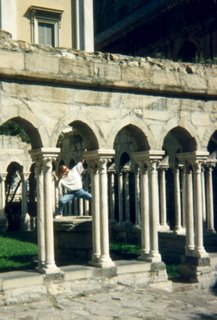 On Sunday we all visited the house of Christopher Columbus and took a train to Cinque Terra for the day. They are five little towns on the Italian Riviera. We hiked from the first town of Monterosso al Mare to the second of Vernazza on a trail that wound through vineyards and along the cliffs over the Mediterranean. The water was so clear. It was amazing. 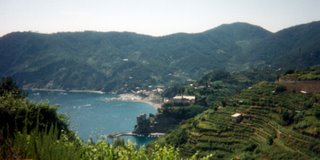 We had a big pizza for dinner and I saw fireflies for the first time as we walked up the hill to our hostel. Pretty Cool! 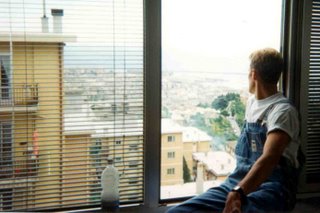 p.s. We could see the entire Genoan harbor from our hostel on the mountain side. Great view and the nicest place that we have stayed at so far.
Posted by Noah Unsworth at 6:39 PM