Getting to Venice by train is very interesting as it leaves the Italian mainland behind and crosses the lagoon on a long causeway. I was struck by the first amazing view of the city as we left the front entrance of the station onto a broad terrace leading down to the Grand Canal with the domed church of San Simon Piccolo on the other side. We took a waterbus and checked into the Ostello Venezia which is a nice hostel right on the edge of the Canale della Giudecca. 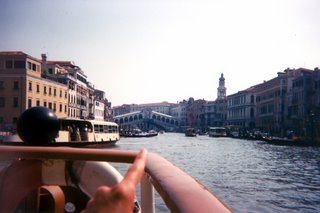 Traveling around a city by the "vaporetto" is so different and very cool. Every type of boat can be spotted cruising by, garbage boats, delivery boats, construction boats and police boats. We went to the Piazza San Marco and climbed to the top of the bell tower, the Campanile di San Marco. It had a great view of the city surrounded by water on all sides. The piazza below was swarming with pigeons. If you jump into the air and stamp your feet when you land, a flock will take flight around you. Pretty cool. 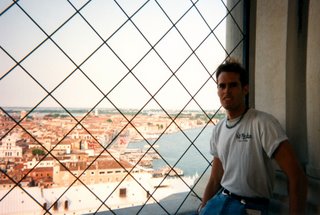 After that we went exploring further into the city, checking out the canals and visiting the "Bridge of Sighs". A little kid in front of us almost fell into one of the canals while riding a toy car. His father grabbed him right before he fell in. There was an interesting leaning tower near a square where we stopped for a hot salami pizza. We found Italians to be very friendly on this trip but the exception was in Venice. The waiter was one of the only friendly Venetians we met. Maybe they are tired of dealing with so many tourists here. 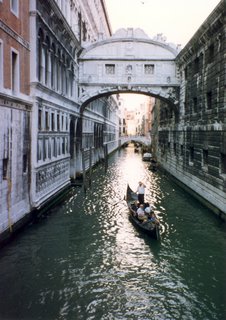 Today, we took a water ferry across the Lagoon from Venice to Lido and walked across the narrow slip of land to the beach on the Adriatic Sea. The water was very warm with no waves and we stayed till five before heading back. 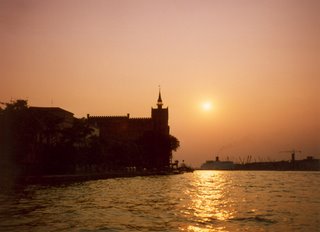 We are having dinner at the hostel and later tonight we are taking a night train to Munich, then hopping a train to Salzburg in the early morning. We are leaving Venice earlier than we want to because there is no room in the hostel for the girls for another night.
Posted by Noah Unsworth at 2:42 PM