Greg and I arrived in Florence today about 3pm. We were able to see allot of the city, visiting the crowded Duomo and the famous bridge, the Ponte Vecchio. We also went to the Galleria dell'Accademia to see Michelangelo's statue of David. It was much bigger than I thought it would be. Another cool statue was the Rape of Sabine. Afterwards, we had a really nice dinner at a small little restaurant for only 14,000 lire. 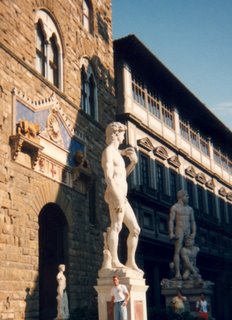 While staying at the hostel in Rome, I was given a unused Florence bus ticket from a Mexican who had just arrived from there. I stamped the ticket in the machine when I jumped on the bus here and everything was fine until an inspector came on the bus at the next stop and started checking tickets. He didn't seem to like mine and asked for my passport. I don't understand Italian so I had no clue what the exact problem was but he wrote down my passport number and gave me a yellow citation. I don't know what it says so I am just going to ignore it. (Shrug) 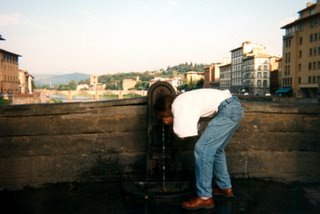 The hostel here is surrounded by vineyards and has the appearance of a large country mansion with nice courtyards to hang out with fellow travelers. Greg and I were given a smaller two person room with its own bathroom which was also very nice. 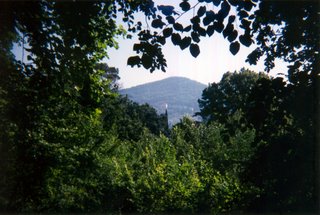 There are thousands of fireflies dancing around tonight. We are leaving for Venice tomorrow to meet up with Wendy and Carey who went to Milan instead of here.

p.s. We keep having the same problem when we buy bottles of water. We keep accidentally buying carbonated water which we don't like. It is hard to tell by the label and even when we try to ask we still get the wrong one sometimes. Oh Well.
Posted by Noah Unsworth at 7:39 PM