Chad and I rode our second Midnight Madness Ride in Downtown San Diego last night. Chad was able to replace my bent back wheel the day before so I was ready to ride. 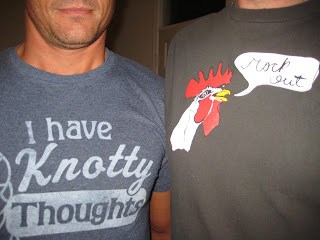 The night was full of mishaps but we had a fun time. It started with Chad's cat escaping from the house as we loaded our bikes. We had to track her down with flashlights before we left. Also, my bike wasn't fully fastened on the roof rack so we had to stop on the freeway to lock it back down. Then Chad realized he forgot his helmet after we arrived Downtown. Both turned out all right. My bike was only slightly bent and Chad was able to buy a new helmet before the ride. 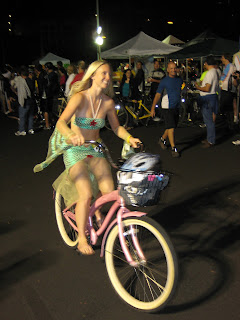 We arrived early enough to watch the costume contest this year. I don't know how some of them can ride the full twenty miles while wearing them. On the course, I was amazed to see a guy pedaling in a giant sumo wrestling suit. It must be tough to keep balanced. Before the start, a rider was doing some cool tricks off the back of a pickup truck before the ride started. 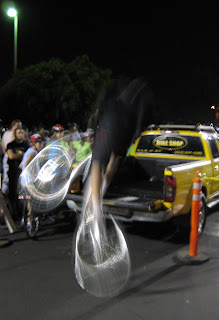 The crowd had really built up before the ride began. At midnight, they released us in groups of 200 every couple minutes and we were in one of the last groups on the road. I haven't ridden in a while, because of my bent wheel, but I felt great and I quickly got better at weaving through the tight pack of slower riders ahead of us. 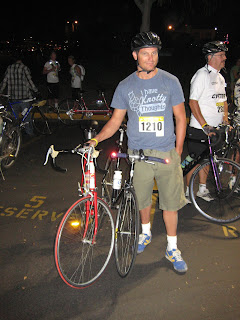 Right after we left Shelter Island out on the course, I hit a massive pothole with my rear wheel in a dark section of road and flattened my tire. My spare tube had cracks in it so we had to patch up the two holes in my flattened tube. The problem came when we tried to fill it. We quickly realized the tube in my new rear wheel had the old-style Schraeder stem that doesn't work with the small emergency pumps on our bikes. Luckily, a mobile bike tech from REI came along with a regular bike pump and we were able to re-fill my tire. 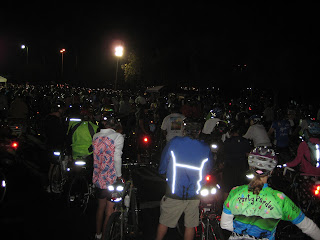 A quarter of the way down Rosecrans, my tire flattened again. I walked the short distance to the am/pm on the corner and sat in the grass. I was done for the night and I had only completed the first 12 miles. I sent a text message to Chad who was a little bit up the road to pick me up with the car after he reached the finish. I enjoyed watching all the riders go by, but I didn't have to wait long. Two race volunteers picking up the race signs, gave me a ride to the finish area. 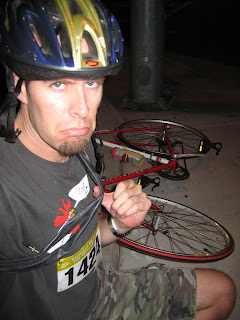 The first time I rode in this race, we finished near the front of the pack. This time I came in at the end on the "broom truck". Heh!
Posted by Noah Unsworth at 2:12 PM