I woke up today with a huge hangover. I drank seven caipirinhas last night. A big mistake with my trip to one of the hillside slums of Rio this morning. A relative of Chad's friend who is studying here for a year met us at a bar in Ipanema and took us to a club in Leblon called, "The House". They gave us a blue card when we entered to keep track of our drinks to pay for when we leave. There was a 40 Real minimum and they charge extra for any drinks after we pass 30. Pretty confusing. His Brazilian friend told us whatever we do, don't lose the card or we will be charged 300 Reals. Yikes! I ended up taking a taxi back by myself at 3:00 in the morning because I had to get up early. I was pretty drunk and barely had enough money after exiting the club to cover the ride to the hotel. 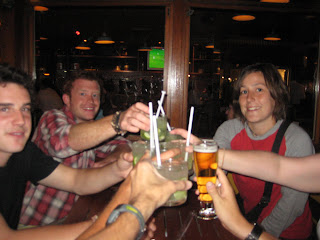 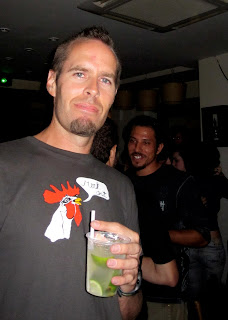 I got picked up by my guide to go to Favela da Rocinha. It is the largest favela in Rio with 200,000 people living on the hillside. It is on the backside of the one of the two mountains visible at the end of Ipanema Beach. (The Two Brothers) A sheer granite wall rises over one side of the favela as it curves along the mountain to the newer section under a forested peak on the opposite end. The favelas are built in the national park area of Rio so all the construction is illegal. The government is trying to build a wall around this favela to stop its growth further up into the tree line. The only public service provided is four schools and two small medical clinics. 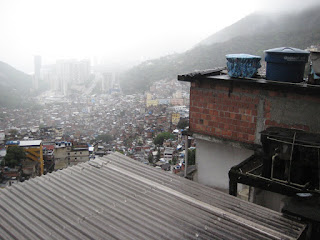 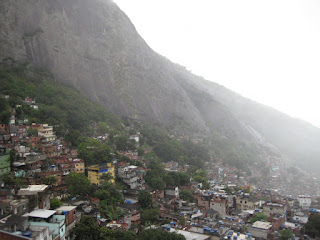 I thought hanging on the outside of the electric tram yesterday was exciting, but riding up on the back of a motorcycle to the top of the favela in the rain scared the crap out of me. I had a death grip on the small handles behind me as we whipped around sharp and steep corners, dodging between oncoming cars and motorbikes. I was afraid the motorbike would slide out beneath us on the slick street. I was one of the last ones in my group to leave from the bottom, but my driver loved passing slower vehicles and we almost made it to the top first. I was still shaking five minutes after getting off. The lingering effects of the hangover did not help at all. 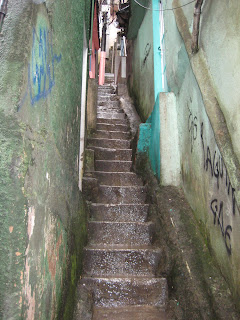 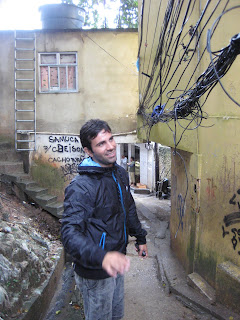 On the roof of a three story green building at the top of the hill we could see the whole favela spread out below us as well as the ocean and the richer areas at the bottom. In the narrow alleyways of the favela, we had to walk in single file to allow others to pass. There was a lot of tiny shops selling food, plumbing supplies, toiletries and clothes. Most of the buildings are built with brick and concrete with long flights of stairs between lined with power and phone lines just above my head. Every three hours, water for the residents is released down the plastic pipes in the alleys for a half hour. Our guide must have greeted and waved to every single person on the way down to the bottom. He was a cool guy. We stopped in a small bakery halfway down where I had a sweet roll and some water. 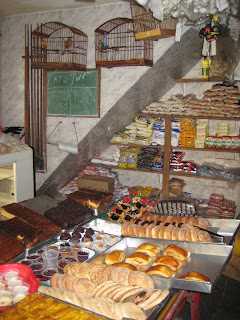 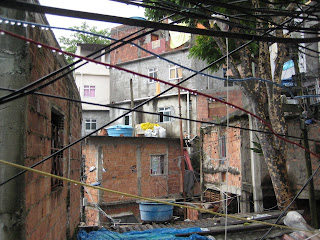 We were allowed to take pictures everywhere except at the very top and bottom and a few places where the gang who controls the favela does not want pictures taken. Rocinha is controlled by one gang called "Friends of Friends". Our guide told us that they control the drug trade, but do not allow the use of crack cocaine inside the favela because of its harmful effect on the community. Ironically, they are very strict on any stealing committed in the favela, everything must be done outside in the rest of the city. One of our last stops near the bottom was a daycare center for children in a blue building run by an Italian charity. One of the kids kept high-fiving us and another taught me a greeting and a hand sign which you tap against your chest. 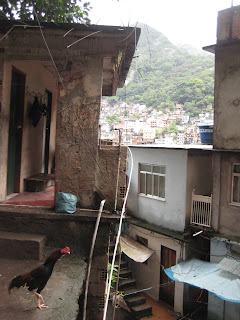 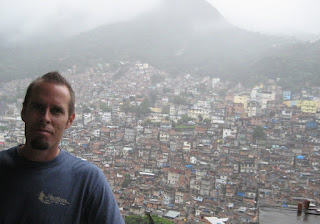 Walking down the favela and eating lunch at Bob's Burgers afterwards with Chad finally cured my hangover. I'm glad, I did not want to fly tonight still feeling that horrible. Heh! 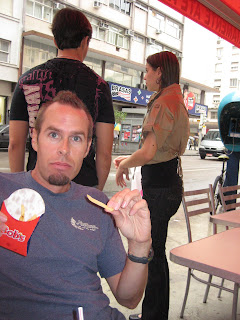 Update 10/22/09: This past weekend, it has been big news that a gang in one of Rio's favelas shot down a police helicopter during a raid, killing several policemen. There has been increased violence since the Red Commandos gang tried to take over the Morro dos Macacos favela controlled by the Friends of Friends. Many gang members have been been arrested and killed since with at least one innocent severely wounded by a stray bullet. Our guide in Rocinha told us that one of the biggest dangers of living in a favela is getting caught in the crossfire when the police raid in the early morning. Stray bullets land in the middle when gang members shoot down from the top and the police return fire from the bottom.


Storytime on our last night in Rio de Janeiro after I've had a few drinks.
Posted by Noah Unsworth at 11:37 AM