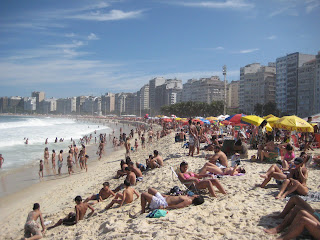 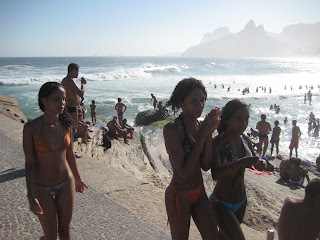 It was another beautiful sunny day when we left Ilha Grande in the morning and drove up the coast to Rio de Janeiro. Approaching the city, we saw the back of the 125 foot Jesus statue high above the city. Exiting a long tunnel under the Corcavado mountain, we drove past the lagoon into Copacabana. After checking into our hotel, we strolled down to Ipanema Beach along the Copacabana promenade with the Portuguese wave pattern set into the pavement. Since it was Sunday, the beaches were packed and the street closest to the sand was closed off to vehicles and filled with bikers, skaters and pedestrians. A surf contest was being held where the swells were breaking around the rocky point separating the two beaches. The waves were six to eight feet and the pros were ripping them up. Walking down towards the two mountains at the end of Ipanema, we saw a lot of the tiny Brazilian bikinis and speedos the city is famous for. 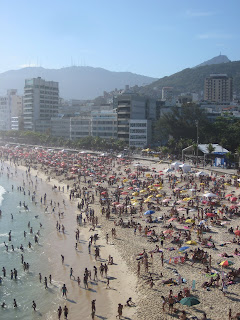 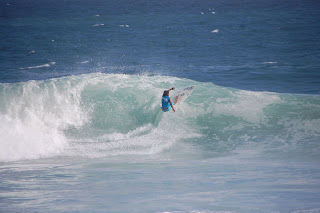 For dinner we had an amazing meal at Monchique, where they served Churrasco Rodizo. The waiters came around to our table with skewers of meat and cut off slices right onto our plate. I couldn't stop asking for more because it was so good and the strong Caprihinas were only 4 Reals each. At 11:00, we were taken to a huge night club at a favela in the Jacarepaguá district. We had access to a VIP section on the second floor, but I stayed on the first floor dancing till 2am. It was hard to dance though because the club was packed tight and we constantly had to move to let people pass by as they went for more drinks. At 3am, sparklers rained down on the crowd and there was a dance contest. It was mostly to find out who was the most talented at ass shaking at various speeds and levels of intensity. :) We left at 4am when the club closed, but we couldn´t find Matt who was missing and Johnny had to be carried between two people because he was so wasted. The square outside was still crowded when we left without Matt, but he turned up safe and sound in the morning after meeting a local girl. I think my hearing has been seriously degraded. 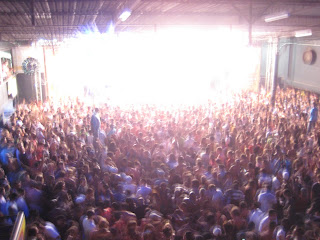 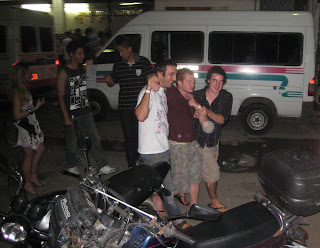 On Monday after only a few hours sleep, we went to swim and relax in the sun on Copacabana beach. The size of the crowd was only a fraction of the day before but the sun was out and the water was warm. The clouds began to roll in in the afternoon when we went to the top of the Corcavado to see the "Christ the Redeemer" statue close up and look down on the city. We could see a long distance in all directions, but it was hot and steamy and there was a layer of haze. I never realized the Jesus statue had nail holes in its hands. We stopped at the colorful mosaic tile stairs in Lapa on the way to Sugar Loaf Mountain. Taking the two cable cars up, we arrived a hour before sunset. The view was not as impressive as from the top of Corcavado, but I think it is more beautiful. We stayed two hours in the cool breeze watching the sun set over the city and the lights come on as the darkness grew. We went and had dinner in Ipanema. The food was good, but they tried to include a 50 Reals music charge on the bill because people were singing karaoke at the back. What?! Heh! 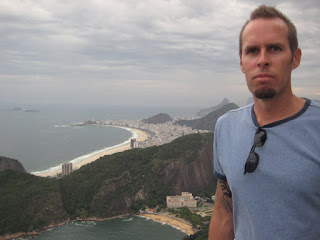 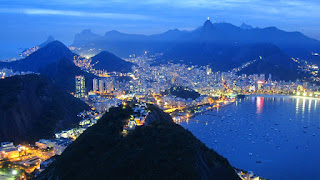 Today, we took the Bondi tram from Downtown Rio up into the hills in Santa Teresa. The open-sided electric tram is bumpy and crosses over a white 18th century aqueduct after it leaves the station. Hanging out from the side of the bright yellow tram, I could see it was a steep drop to the streets below. Yesterday, I saw little kids hanging off the sides, jumping on and off at each stop. (Sometimes before it had come to a complete halt.) It was fun hanging one-handed to a wooden handle as the tram whipped around corners. I had to be careful of oncoming cars zipping by though. Tonight we are going back for more Churrasco Rodizo and then going out in Ipanema. 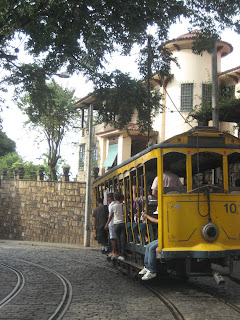 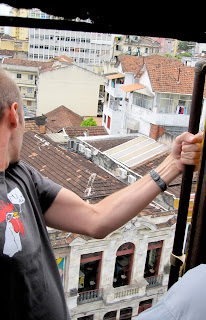 It has been raining off and on today and is supposed to continue until tomorrow so I will not get to hanglide over Rio like I planned. Instead, I am taking a walking tour through a hillside favela in the morning before Chad and I fly home at 10pm. It has been a great trip, but I always look forward to coming home to San Diego. 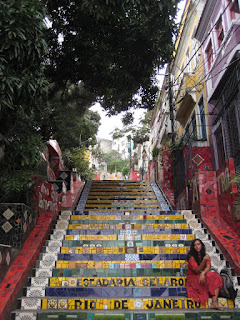 p.s. I've eaten countless fried meat pastries here in South America, especially in Brazil. The most interesting was a tear-drop shaped lump of fried mashed potatos wrapped around some type of ground meat that I ate late at night in a bus stop cafeteria. It turned out to be pretty good. 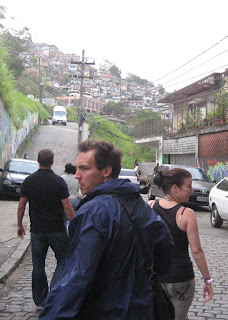 p.s.s. At the end of the electric tram line, we got off thinking we would explore. The conductor shook his head and said something to us, but we were not paying much attention as we wandered down the road toward a favela. After the tram went about twenty feet it halted again and the conductor shouted out after us again. Thinking twice about where we might be heading, we jogged back and jumped on the tram and headed back down the hill. Halfway down, he gave us a smile and indicated a tram stop where we could get off and walk around Santa Teresa. I still don't know if we were accidently heading into a dangerous area or if he was just letting us know that there was nothing interesting to see at the top. Later, he gave us a wave as his trolly passed while we walked down the hill looking at all the cool buildings. 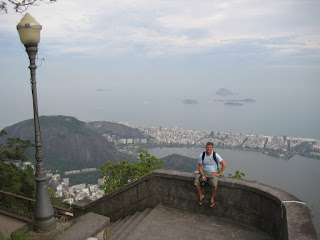 p.s.s.s. We keep seeing Different Strokes on Brazilian TV in the evening. Hearing the high-pitched squeeky voice dubbed in for Arnold is very weird. "What you talkin bout, Willis?"

p.s.s.s.s. "Give me a moment. I need to go change my pants," I said as I walked out of the room to get dressed for dinner. Several members of my group broke out into wide grins and chuckles as I disappeared around the corner. Realizing too late what pants meant to the majority of them, I quickly stuck my head back around the corner. "I meant pants in American, my jeans. Not my underwear." 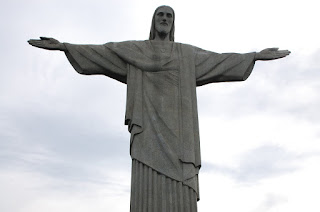 Update 10/2/09: Rio de Janeiro won the right to host the 2016 Olympics today. I wish could have stayed in the city for two extra days so I could have witnessed the celebrations. There were signs all over the city promoting the city's Olympic bid. I saw a woman kiss the banner hanging around the base of the Christ Redeemer statue.
Posted by Noah Unsworth at 2:55 PM