Since we enjoyed the Van Gogh Museum during our 2017 Amsterdam trip, Tori and I decided to go to the Beyond Van Gogh: The Immersive Experience that is currently in San Diego. It wasn't crowded when we arrived on a weekday afternoon at the Del Mar Fairgrounds. For the first part of the exhibition, we walked between the illuminated panels filled with quotes and text describing the life of the Dutch painter, Vincent Van Gogh, who committed suicide at 37 years old. Taking up painting in his twenties in 1881, he was most prolific during his final years when he lived in the south of France and suffered from depression. He created some of his most famous paintings while living in psychiatric hospitals after cutting off part of his ear during an argument with his painter friend, Gauguin. 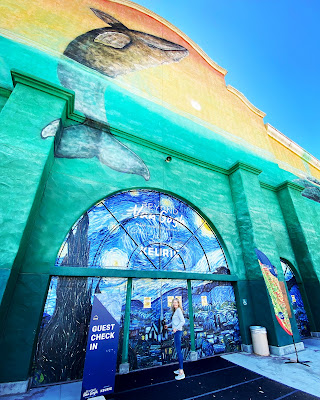 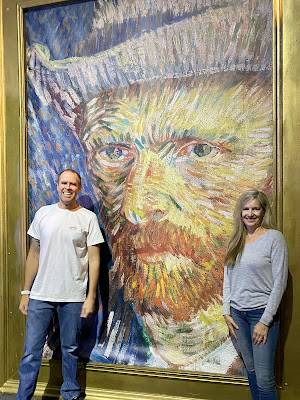 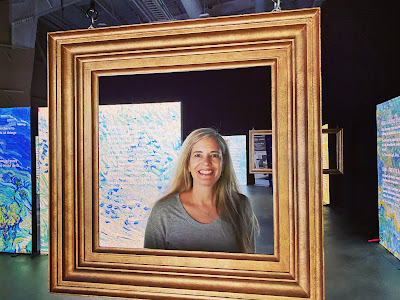 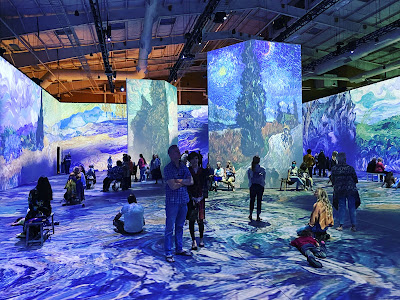 Since there was no line, we were able to enter the Immersive Experience part of the exhibit without a wait. Inside the large hall, over 300 of his masterpieces come to moving life, projected in amazing detail on the floor and walls surrounding us. The special projectors directly overhead sprayed out over four trillion pixels to show the larger than life paintings in high definition. It was great to just wander around and feel like we were inside the impressionistic landscapes created by Vincent Van Gogh. The thirty-five minute multimedia experience was created by the French-Canadian director, Mathieu St-Arnaud, and his team at Normal Studio in Montreal. With all the video game studies in that city, I am not surprised that they were able to produce this cool virtual reality. 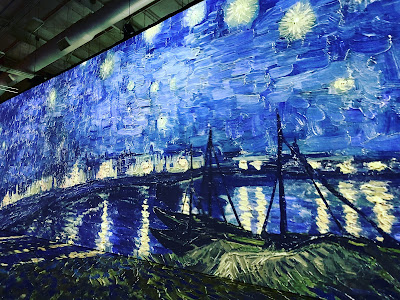 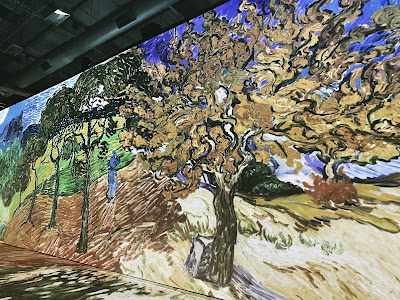 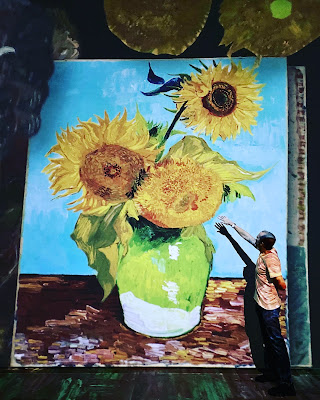 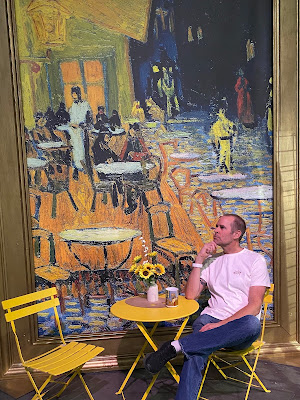 Watch videos below for the moving images and the accompanying audio of the Immersive Experience. My favorite was the falling petals from the Almond Blossom's painting.

After visiting the Van Gogh exhibit, we went to Cutwater Spirits for dinner. They are an award-winning local distillery that specializes in canned cocktails that Tori and I have enjoyed many times. In 2017, they opened a Tasting Room & Kitchen at their production facility in Miramar. It was cool to see their tall Column Still bubbling away inside the two-story glass tower. We could see the fermented mash sloshing around through the bottom port holes as the heat vaporizes the liquid and forces the alcohol and other volatile molecules up the copper column of the still. After the vapor is diverted from the top of the still, it condenses out into the liquid form of the particular spirit they are making. 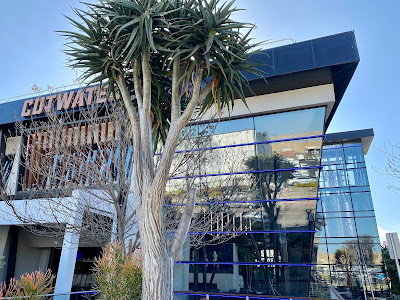 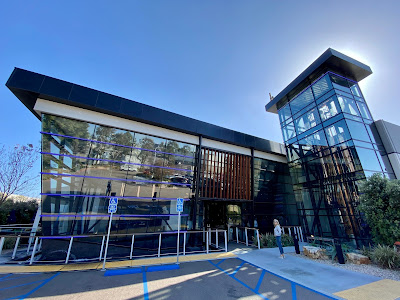 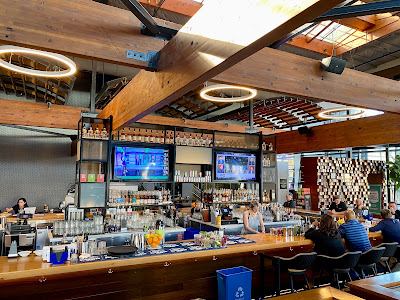 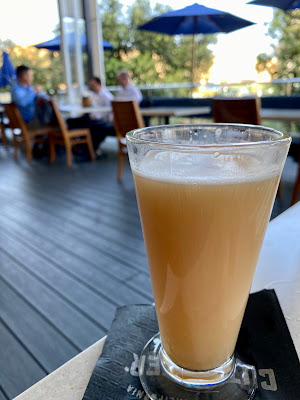 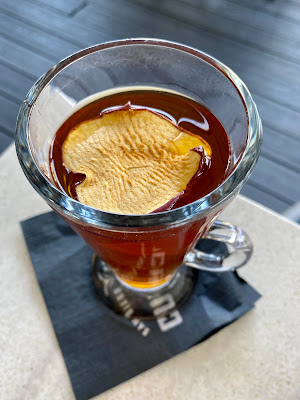 After being seated on the outside deck, we each tried a Cutwater Heater cocktail. Tori had the Vodka Apple Pie while I enjoyed my Hot Buttered Rum so much that I bought a bottle to take home. I ordered the Devil's Share Burger, perfectly flavored with its aged white cheddar, crispy fried onions and Bourbon Bacon jam. We were surprised by the blue rice in Tori's Malaysian Curry which gets its natural color from the Pea Flower in Southeast Asia. For desert, we shared the Tiki Monkey Sticky Toffee Pudding. This might be our new favorite dessert, beating out the Warm Butter Cake from Nick's in San Clemente. We want to come back for the distillery tour when it returns this summer. 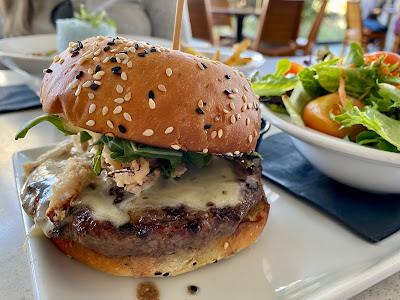 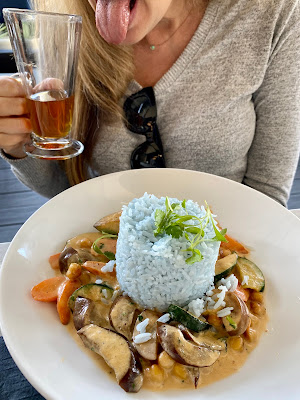 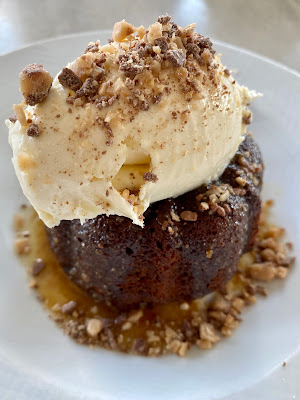 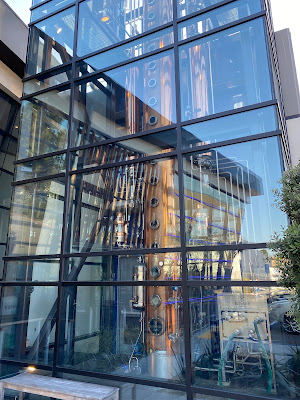 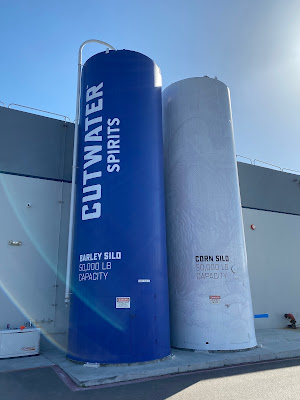 Posted by Noah Unsworth at 7:30 PM