I went snorkeling on Sunday with Chad, Fatima, Vince and Dave down in La Jolla. We went to the Cove first. For the last few years we have tried to come snorkeling here a few times every summer. The water was a little cold inside the small rocky cove but once we swam out into the open water the temperature warmed up. The visibility was not very great, but we saw the usual assortment fish with the bright orange Garibaldi being the most prominent. 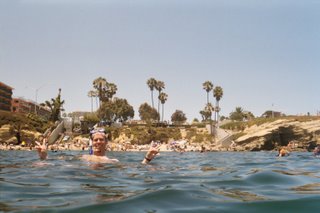 The first cave along the cliff is pretty cool. It has two narrow openings that you can swim through into a decent size cave. There was a bit of a wave surge so I would use the forward swell to swim forward and then hang onto a rock along the bottom when the surge would suck back. The back of the cave opened out onto a rocky beach. We tried to get out on the beach for a brief stop but the waves were too rough against the rocks on the shore. Fatima lost one of her fins but Vince was able to rescue it before it was swept away. I was trapped with my back against a large rock as I got hit by wave after wave. I dropped my camera twice and I got scrapped up pretty good before I was able to escape back into deeper water. 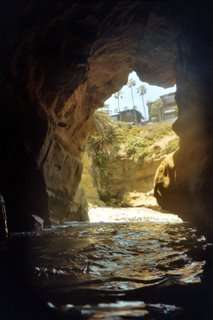 Vince lost his mask while taking a picture with his camera so he headed back to the Cove. The rest of us swam further down the coastline to the second cave along the cliff face. The best visibility of the day was in the water outside. There were quite a few people on the little platform inside the cave that you can reach by going down the narrow tunnel steps from the old shell shop on the top of the cliff. The surge wasn't as bad there so I had less trouble entering and checking it out without getting washed up against the rocks. 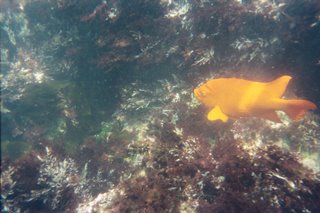 After our swim back to the cove we were pretty hungry so we went to the Hard Rock Cafe up the street for lunch and a couple beers. The blue cheese burger with the horseradish sauce on the side was great. 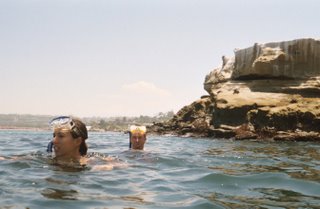 After dropping Vince off at his car, we headed over to La Jolla Shores. Parking was hard to find but we finally found a spot by the Marine Room. I got stung when I stepped on a bee, but it was no big deal. We relaxed on the sand for a while before going out snorkeling again. We were hoping to see some of the leopard sharks that Kurt had told us were around this weekend, but all we saw was lots of stingrays and five foot long sandsharks.

On Saturday, we went to Christina's Birthday Party at Moonlight Beach. I had a fun time surfing with Christina and playing quite a few games of sand volleyball. We had a nice bonfire after sunset. 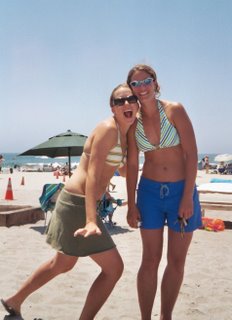 La Jolla on Dwellable
Posted by Noah Unsworth at 1:25 PM