Dave installed a second rig out at Trapeze High with an inflatable airbag instead of a net. On Saturday, after working the first two classes on the regular rig, Tori and I tested it out for the first time. There is no need for safety lines with the forgiving airbag, but it appears from the board to be much narrower than a net even though it is not. The video below is of Tori's first swing.

On Sunday, Tori and I used our free Coaster passes to take the train Downtown with Lisa and Tucker. After eating lunch at Magnolia Kitchen and Tap, we walked around the busy Gaslamp Quarter. 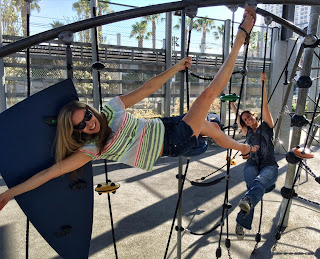 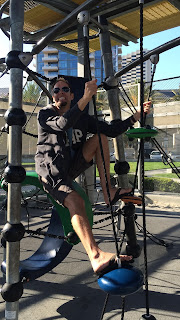 On the walk back up to the Santa Fe Depot, we stopped for little Tucker to play in the Children's Museum Park. We probably had more fun climbing on the jungle gym than he did. We also stopped at "The Headquarters", a new shopping center built inside the old San Diego Police complex next to Seaport Village. We ate some gelato and checked out the restored jail cells before catching the train home. 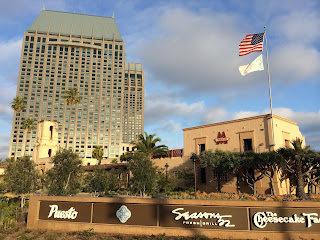 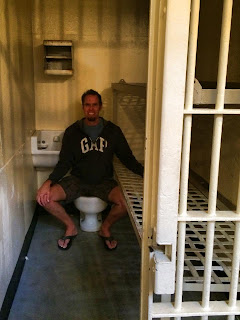 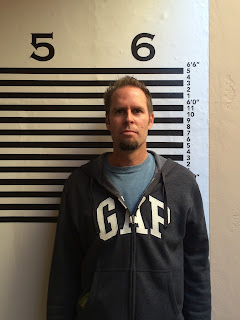 For Memorial Day, Tori and I went back out to Escondido so we could fly with Corinna and Darin. Despite catching for many months now, I rarely get the chance to catch my wife since we are so tired after the classes. After working on my warm-up swing, I went up in the catch trap and caught my wife's Splits and Layout. It was my first time catching one of her release tricks. I also caught Corinna's Splits and Whip. In Tori's Layout video below, you can see a little girl doing a Knee Hang Back Flip into the new airbag in the background.

Afterwards, we went over to Kenny and Jill's to do more work on the yurts we are building for Burning Man in August. When everybody arrived for the BBQ, we hung the triple trap on the Static Trapeze Rig for Tori, Jill, Lisa, Jennine and Kenny to play. 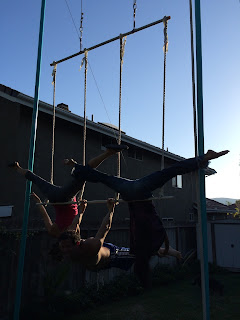 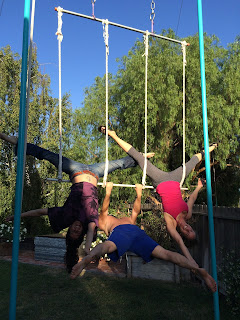 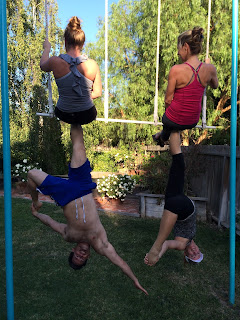 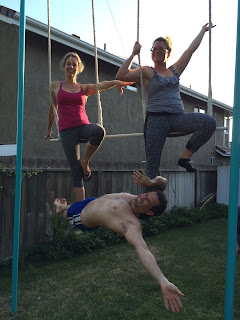