For Earth Day, Lindsay invited Tori and I to join her at the March for Science in San Diego. We wanted to share our support for evidence-based science policies to be enacted by our government and for them to continue funding the important scientific research that helped America produce the most Nobel Prize winners in the world. We met up with Lindsay this morning at the Linda Vista station to ride the Trolley into Downtown. It was really crowded with all the others heading down to the march with their signs. 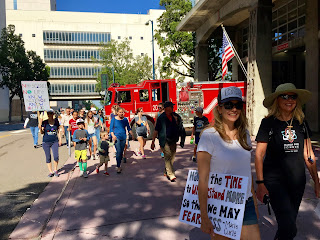 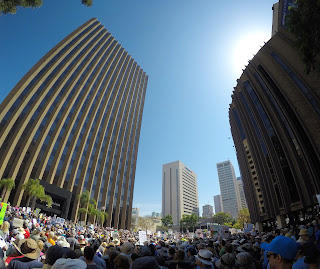 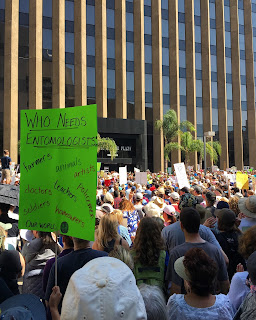 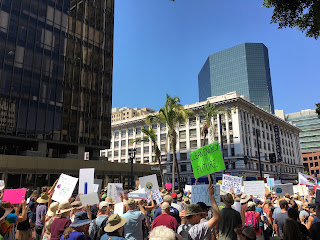 Civic Center Plaza was filling up rapidly as we arrived but we managed to get a spot in the shade. While many signs targeted Trump, most focused on how important science is for humankind. (Many very funny!) While the main rally was occurring in Washington D.C., we were one of 600 "satellite" marches held on every continent on Earth. The rally began at 10am with several speeches by local PhD scientists discussing their research on the ocean and our atmosphere. We also heard from two young students awarded for their science fair projects, the benefits of permeable concrete on water drainage and techniques to reduce evaporation from water reservoirs. "White Balls are better than Black Balls." 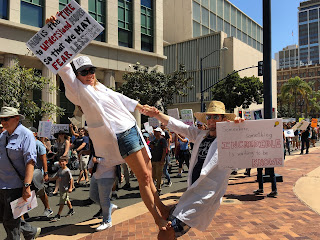 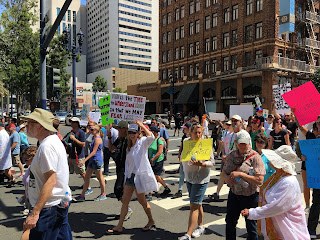 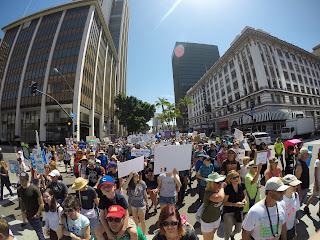 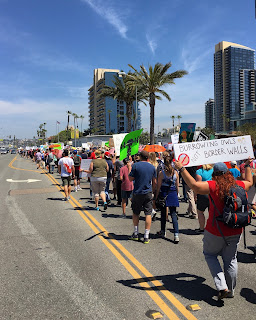 At 11am, the march began as we left the plaza on Third Avenue before turning onto Broadway to head towards the harbor. There were lots of great signs but my favorite was, "Science is not a Liberal Conspiracy!" Halfway down Broadway, Tori and I attempted a Thigh Stand, a standing counter-balance pose we learned at our AcroYoga Jam a month before. It was a little trickier to do one-handed while holding our signs but we pulled it off. Several people wanted to take their picture with us since they thought it was a great example of Physics. When the march reached the water, the route turned north along Harbor Drive until we reached Waterfront Park. It was a hot sunny day, but everyone was in a great mood with tons of kids running around in the fountains. The San Diego Union-Tribune reported that 15,000 participated in the downtown event. 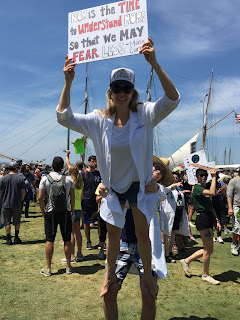 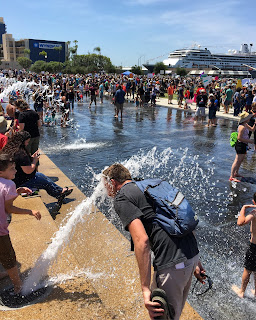 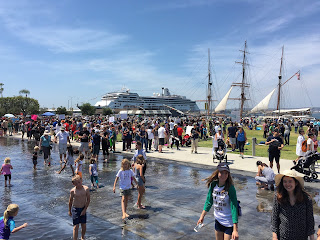 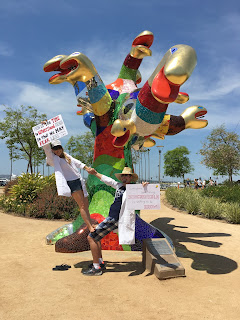 Leaving the park, we wandered into Little Italy where Lindsay treated us to lunch. Our first stop, the vegan Gratitude Cafe had an hour wait so ended up at Herb & Eatery, the casual cafe out front of the fancy new restaurant by Brian Malarkey, Herb & Wood. The sandwiches were awesome!!! I would go back just for the buttermilk roll on my Roast Beef and Smoked Cheddar! (Quite the opposite from our planned vegan meal.) After lunch, we took the trolley back up to Linda Vista where we attended the AcroYoga Jam at Aerial Revolution. It was a long, fun day!
Posted by Noah Unsworth at 8:35 PM