This is the second year that Trapeze High has set up their rig on the golf course of the Welk Resort. To get it ready for the weekend Spring Fling Festival, we erected the rig on Friday. The crane bars went up pretty quickly but it took until 4 to finish setting up the net. 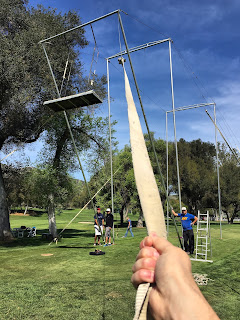 The festival opened at noon on Saturday and I worked up on the board for the first two hours while Tori manned the waivers tent. I spent most of the time lifting little kids so they could reach the bar. Lots of new flyers were able to try flying trapeze for the first time. Hopefully, they will be excited enough by this taste of circus to come take a class at Trapeze High in Escondido where they will learn some tricks and have them caught by a catcher. 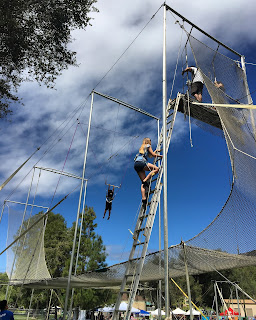 Dave set up his new 11' Kiiking Swing next to the Trapeze Rig. While a lot of people attempted it, only a few managed to get over the top. Squatting over and over again against the heavy g-forces at the bottom of the swing is a hardcore legs workout! Dave and Lianna strapped in several times to demonstrate for the crowd. After coming down from a shift on the trapeze rig, Dave asked if I wanted to demo it as well. This was only my second time on the Kiiker but I had much more control this time. No more yelps of fear as I went over the top. Ha!

Posted by Noah Unsworth at 2:17 PM