During the Memorial Day BBQ, I flew with the GoPro Chesty Harness for the first time. (I have worn it before while catching.) I experimented with the camera pointing straight out from my chest, up at my head and down at my feet. I discovered that I like the feet angle the best since the viewer has the ground in sight to orient themselves. Below are videos of the three different camera angles while I performed the Turnaround. My turn is improving but I am still bumping the board on my second trip over. I need to remember to extend and pike.

Below are video and time-lapse photos of my Man Splits. Normally, I am too focused on my swing and the trick to enjoy the view. I need to straighten my legs and point my toes more while in the Splits. Tommy and Mark both wore the GoPro camera too while flying in Speedos. It was quite funny! 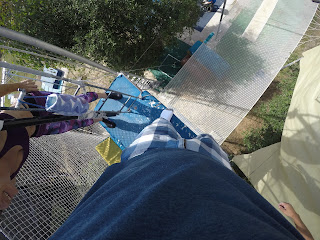 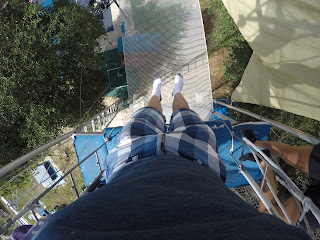 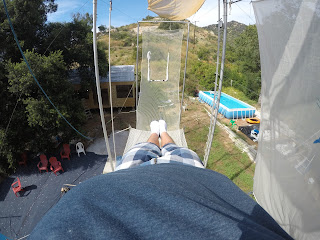 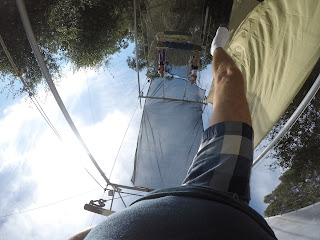 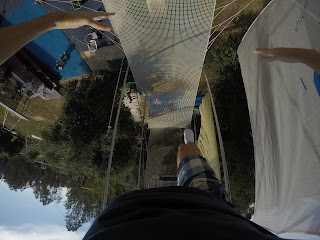 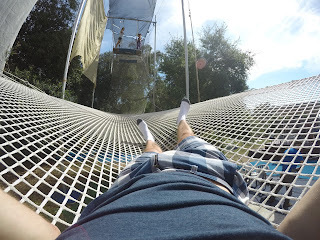 After everyone flew for awhile, Chris and Isaac both went up to catch. Here is a photo of Isaac catching Vanessa's Splits with Tommy pulling the safety lines in his Speedos. 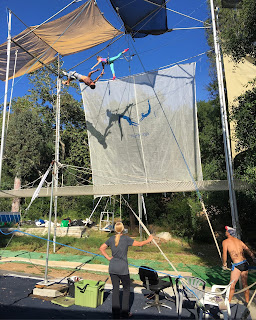 After catching, Chris and I ziplined into the new pool a few times. Walking up the rattlesnake-infested hill is the scariest part. The zipline was fun and the new pool has a much bigger drop zone than the old circular pool where you had to release at the exact right moment to avoid hitting the sides. Lindsay experienced that first hand when she left a dent in the side and a colorful bruise on her leg to show for it.

Posted by Noah Unsworth at 9:55 PM