The train from Salzberg to Zurich was the most scenic train ride so far even though it was raining. High mountains on either sides with countless waterfalls streaming down the sides. We had to switch trains to reach Bern and then another to reach Interlaken, Switzerland on the afternoon of the 3rd. As you can probably tell from the name, it is a town that sits between two lakes at the base of the Jungfrau mountain region. 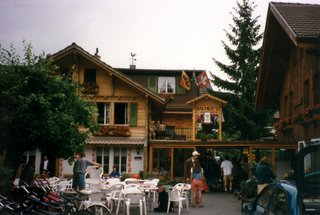 We stayed at Balmer's Herbage, a hostel which is a big hangout for Americans. The first night we had to stay in their large tent set up in a nearby field. I had my first big scare when I almost lost one of my contact lenses that night. Several helpful people where on their hands and knees helping me seach for it. I was so happy when a girl found it unharmed. Phew! 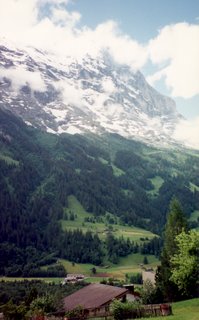 Yesterday, we took a train up into the high alps to the village of Grindelwald for a daytrip. It was a beautiful sunny day and the views of all the surounding mountain peaks was amazing. We took a long hike to reach the glacier that sits between the two mountains peaks of Shreckhorn and Wetterhorn. I felt like I was walking in a movie set as we passed farms, cottages, miniature forests and sparkling streams. 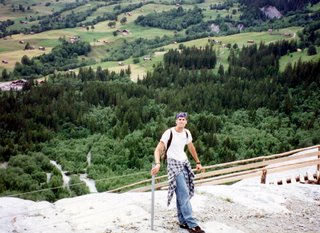 It was a long hike but we reached the long, steep wooden stairs that lead up the cliff face to the glacier. At the top, there was a great view of the valley we had just hiked up but the coolest part was inside the icecave of the glacier. The outside of the glacier almost blended in with the grey rock face around it but with a blueish tinge to it. Inside the cave it was like being in a beautiful blue crystal tunnel. The tunnel wound far back into the glacier to rooms filled with statues carved out of the glacier ice. This was the highlight of my trip so far. 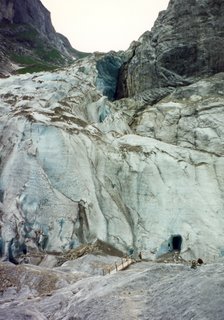 Back in Interlaken that night, we stayed in the main hostel instead of the tent and I had Cheese Fondue for the first time for dinner. Since it was the Fourth of July, the hostel had a big bonfire in the woods nearby to celebrate. Lots of people. 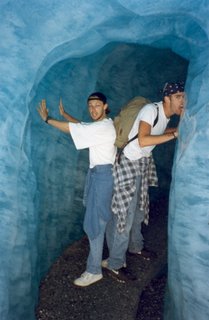 This morning we took a ferry ride on Lake Brienzersee and saw a large waterfall. It was cold out on the lake. I am writing this on the train to Mainz, Germany which is alongside the Rhine River. Greg and I split up with Wendy and Carey after Interlaken but we will meet up with them again in Amsterdam. 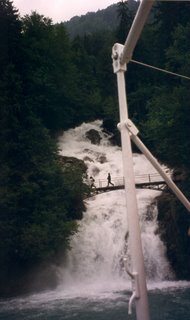 p.s. Switzerland is very expensive. It costs 10 dollars for a Big Mac, fries and a Coke. Minimum wage in Switzerland is 12 francs/hr. = 11 dollars/hr.
Posted by Noah Unsworth at 7:27 PM