I just stayed three nights in England. After another night of little sleep on the ferry across the English Channel, we arrived in London around 8am on Sunday. We took a train out to stay at Teresa and Irbe's house in Wimbledon. Teresa is the sister of our good friend, Matt, who moved to London with her French husband. 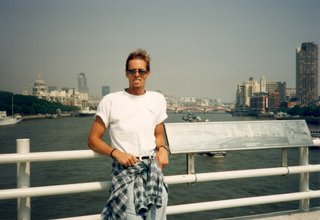 We arrived in town at the same time as the end of the Wimbledon tennis tournament. We watched the finals on TV and it was cool to listen to the crowd cheer outside the window from the nearby stadium along with the action on the television set. Pete Sampras won. We were pretty shocked to learn that you have to pay taxes to own a TV in England. Later that night after a nice dinner of pasta and home-made pesto, we walked with Teresa and Irbe to a nearby pub for some beers. 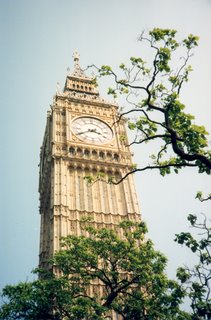 On the 10th, Greg and I went all over London and saw Big Ben, Westminster Abbey, Buckingham Palace, Hyde Park, Picadilly's Circus, Tower of London and the Tower Bridge. We were quite surprised when we got charged by some attendant in Hyde Park for sitting in a couple of chairs for a moment to rest. It was really hot & humid today, especially in the London Underground. The Tube was like a sauna. 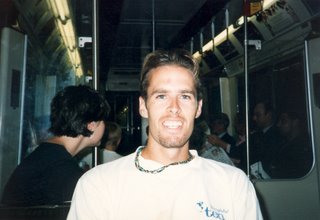 Greg left yesterday morning to get back to his job in San Diego and now I am traveling by myself for another month. Since it was the first day of the trip by myself, I mostly relaxed and hung out at the parks and at the crowded Picadilly's Circus. To escape the heat, I went to the theater to see "A Perfect World". It was pretty good. I also visited a book store to buy a couple of books by Terry Pratchett to read on long train rides. I got my first haircut on this trip. I had been waiting to get to England so I could explain how I wanted it cut in English. 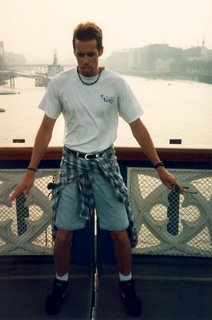 Right now I am on the 9:23am Eurostar train that goes under the English Channel through the Chunnel to Paris. I left early this morning from Teresa and Irbe's house. They were great hosts. It was nice to sleep in a normal bed for a change and catch up on my laundry. They also lent me a nice camera to use for the rest of my trip. Greg and I had been buying disposable cameras with no flash since ours was stolen in Spain.

p.s. The listed prices for everything seemed cheap here in the UK until we remembered to take the exchange rate into account.
Posted by Noah Unsworth at 9:57 PM