I just spent four days in Brest, France with Aude Letelier and her family. I arrived on Friday evening after stopping in Paris earlier in the day where I visited the Eiffel tower again with a Swede and a Scotsman I met on the train. We climbed up to the second level before I had to catch my next train. 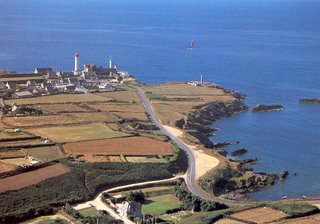 On Saturday, Aude drove me out to Le Conquet to walk around Pointe St-Mathieu and the beach at Les Blanes Sablows. It was a long, white sandy beach and the best one I have been to in Europe so far. We also checked out the ruins of an old abbey on the point. Aude is still learning how to drive and she accidentally went the wrong-way down a narrow one-way street along a cliff edge. We got blocked by another car coming up the other way and she wasn't able to reverse the car back up the hill. I have always been good at reverse driving so I got to show off my skills as I took over and sped backwards up the windy road. Heh! After that little adventure, she took me to a bar to meet her friends. 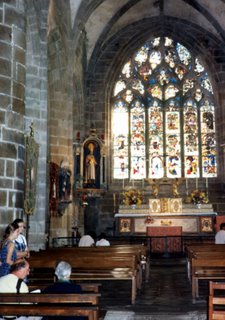 Sunday, I saw most of the Finistere Peninsula by car with Aude's whole family. We visited the old medieval town of Locronan that is used frequently as a location in films. We went out to Pointe du Raz, the rocky western tip that I had a fun time climbing and exploring. For lunch we had crepes, the specialty of the area. 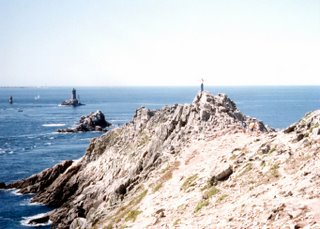 On Monday I went sailing with Aude's friend, Irbe, in his Hobie Catamaran. It was a nice sunny day with no clouds but also very little wind. We caught some nice gusts but we also had to do a little paddling at times.

I went to the beach on Tuesday with Aude's brother, Charles, on my last day in Brest. It was a sunny day, but the water was very cold as we swam out to the raft anchored out in the ocean. We played some smashball and had a nice picnic lunch.

Aude's mother was a great cook. I ate the most amazing meals with lots of bread and cheese on the side. With each meal we had wine and home-made cider from the cellar that Aude's grandfather had made. The weather was perfect the whole time. Aude's family told me that this is unusual for Brest and that it is normally overcast and windy.

I almost missed my train to Paris this morning. I had to ride the Paris Metro this morning even though I was a little nervous after yesterday's bombing on one of the Metro trains. Now, I am on my way to La Havre, France to catch a ferry to Ireland.

p.s. Riding bicycles to the store with Charles to buy baguettes for dinner one afternoon was an unusual highlight of my stay in Brest.
Posted by Noah Unsworth at 6:30 PM