I am back at the Rhein River. On my trip down from Sweden, I stopped at the beach in Klampenborg, Denmark. Too bad it rained again. I also visited the small enclave of Christiania inside the city of Copenhagen. It is a "Free Town" founded by hippies in 1971 that claims "self-rule" from Denmark and even has their own flag. I think it survives mostly on the sale of marijuana and hashish that is displayed openly in booths on the main street which is not allowed in Copenhagen. After checking the place out, I caught a night train to Germany. 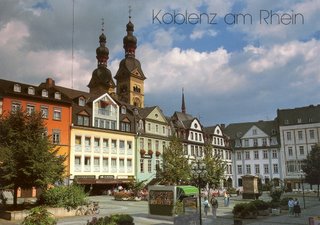 I arrived yesterday morning in Koblenz to stay at Jurgen Zack's house for the night. I had met him in my home town of Encinitas where he spends part of the year training for his IronMan triathlons. Before going to his house I walked around Koblenz, visited a park along the river and went to the Deutsches Eck monument (Jurgen told me it had only been finished being rebuilt two years ago after being damaged in World War II) where the Rhein and the Mosel rivers meet. 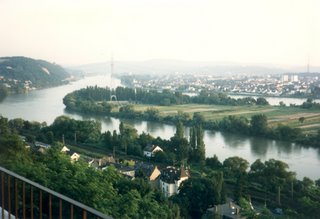 I had a little trouble finding Jurgen's house on a hill across the river from Koblenz, but a nice lady gave me a ride in her car to his address. I got there right when Jurgen was finishing up a meeting with a representative from a soft drink company who wanted him to endorse the product. I got to try one of them, it was called a Red Bull and it was pretty good. After checking out his place which had a great view of the river and the surrounding city, Jurgen took me out to eat and then to a bar to have a few beers. I had an interesting pizza that had a type of white sauce instead of the normal red. It was delicious. 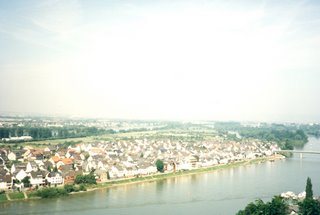 This morning, he lent me one of his mountain bikes to go cruising around Koblenz while he is out on one of his training rides. When I got back from my ride, we watched the IronMan Triathlon on TV that Jurgen had just won in Roth, Germany. I had never watched one before, it looks impossible. I was amazed by how many kilometers of biking and running and laps of swimming he told me he has to do every week to train.

It was very hot, so we went to the community pool complex where everybody hangs out. It was very crowded. I hung out in the pool, layed out for awhile on the grassy area, took a couple of dives off of the high dive and watched a few of Jurgen's training laps in the pool. He swam for a long, long time. Afterwards, I met a few of Jurgen's German friends. They were as nice as he was. They suggested I should visit Portugal later in my trip.

Now, I am on a night train to Paris. From there, I am then heading to Brest, France to meet up with Aude tomorrow.
Posted by Noah Unsworth at 9:16 PM