Greg and I had a nice breakfast at the castle hostel before we left. It was all you can eat. After arriving in Koblenz by boat, we took a train to Amsterdam where we arrived around 7pm last night and met up with Wendy and Carey at the station. 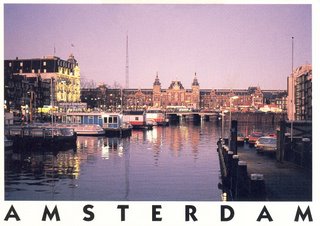 Greg, Wendy and I decided the best way to see Amsterdam in the short time we had was to stay awake and walk the city all night. We put our luggage in a locker and took Carey to the hostel. She was really tired and wanted to get a good night's sleep before her and Wendy's flight home the next day.

Amsterdam is a very wild and raunchy city. Every few paces we would get propositioned for every type of drug imaginable. Lots of beggars as well. Our first stop was the Sex Museum. It was pretty entertaining and Greg and Wendy had a good laugh when I was unexpectedly goosed by special chair that I had sat down in. I jumped pretty high. 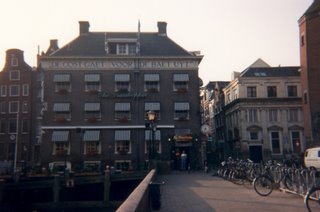 Our next stop was the "Grasshopper". It is right across the canal from Centraal Station. The first two floors of the building is a bar but in the basement is the dealer who sells pot. We bought a gram of majiuana and rolled ourselves some joints. It was pretty good and I got nicely high. We ended up chatting with a friendly group at the next table and sharing each others joints. It was Wendy's first time and she got a little sick but recovered nicely. The room was pretty low-lit and smoky. You could probably get high just sitting in there and breathing.

The rest of the night we spent wandering around the city and visiting the Red Light District. The girls in the lighted windows looked pretty haggard. I can't see anybody wanting to pay for that! We ended up in a gay bar for awhile by accident. Heh! The pink neon should have tipped us off but we were pretty tired and out of it. 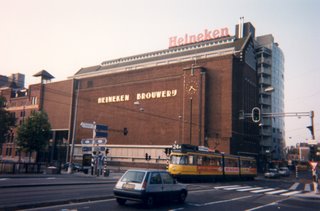 This morning after saying goodbye to Wendy and Carey at the train station, Greg and I walked down to visit the Heineken Brewery. Doh! It was closed but we did bump into the same beggar who had asked us for money twice before during our night-time walk. This time he started to ask for money, noticed that it was us, and said with disgust, "Oh, It's you again!" and walked away. We had a good laugh about that. 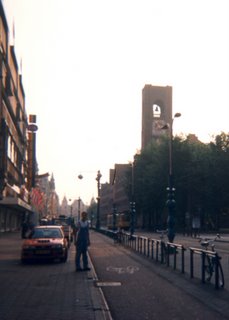 We are about to catch a night ferry across the English Channel to London. We have been here in Oostende, Belgium for awhile now after catching a morning train from Amsterdam. Greg and I are exhausted after being awake for more than 36 hours so far but we walked around a little and had pasta for dinner at a nearby restaurant.
Posted by Noah Unsworth at 7:53 PM