On the way here to Sweden with Roberto and Marcio, we stopped at a small beach at Hornbaek in Denmark. Too bad it was raining off and on, but it was very scenic anyway. 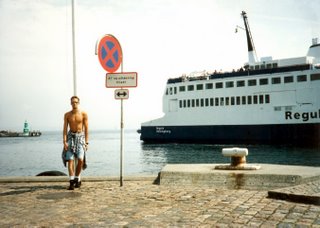 We had to take a ferry to cross over from Helsingor, Denmark to Helsingborg, Sweden. From there we hopped a train to Goteborg and arrived at 11:30pm. The days have been much longer here in Europe. It was still light out until after 1am last night here in this northern country. It is a big difference from San Diego where the daylight lasts until about 9pm at the latest. 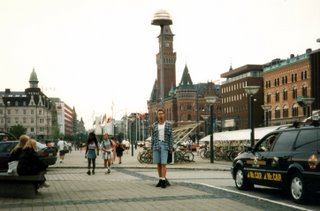 Goteborg is a very clean city and you can see the signs and preparations for the Athletics World Championships here next month. Today we went to Nordstan, which is Sweden's largest shopping center and also down to the port to see the Barken Viking ship (a 20th century sailing ship) moored by the brightly colored Skanska House. We also went for a walk down the Avenyn, the city's main shopping street lined with restaurants and cafes. At the end is the statue of Poseidon standing in the Gotaplatsen square. 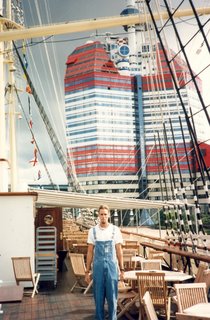 Roberto and Marcio left for Olso, Norway this afternoon. I wanted to go with them to see the fjords, but I have to get back to Germany to meet up with Jurgen Zack. Roberto and Marcio were great guys who are going to school to be doctors in the city of Sao Paulo, Brazil. I also need to get back to Germany as well to get more cash. The ATMs here in Scandinavia don't accept my type of ATM card and to conserve cash I have been living on cheap candy bars. I got a bit lucky when I found a pile of Swedish Kroner coins when I was sitting in the park after visiting the Haga Nygata. 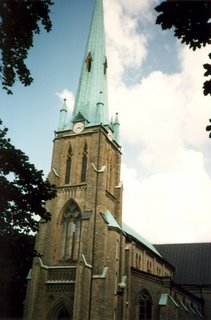 Tonight, I found myself wandering in a cemetery near my hostel in the late night twilight. Tomorrow, I leave for Germany.

p.s. If I was blind, I would like to live in this city. All of the crosswalks "beep" and have Braille on them, but as a person with sight all the beeping started to drive me crazy.
Posted by Noah Unsworth at 6:06 PM